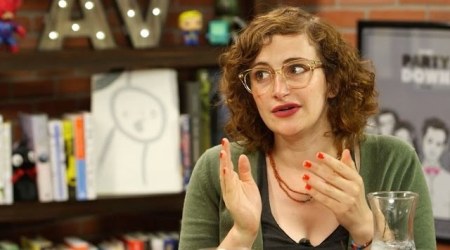 Jo Firestone (exceptionally inventive and irresistible rising star; The Chris Gethard Show, radio host of WFMU’s Dr. Gameshow, live-on-stage host of Punderdome 3000 and The Incredible Game Show Showcase) hosts this “anything might happen comedy chaos” monthly show. Tonight “There are over 237 problems in the world but not for long. Join us for The Telethon, a star-studded benefit concert and variety show to raise real money to give a dog a real Bar Mitzvah (also to give to the real New York Immigration Coalition). Remember: Money can’t buy happiness, so give it to a good cause!“: Jo Firestone Presents The Unexpectashow (11:00 pm, $5, UCB Chelsea at 307 West 26th Street)

[TOP PICK] 7:30 pm ($5): On Christmas week, every UCB East Wednesday improv house group—The Union, Barrymore, Steakhouse, Blush, The Nightmare, and Slingshot—performs for 30 minutes each on The Longest Lloyd Night of the Year

9:00 pm ($10): A hip-hop musical parody of Orange is the New Black, but set in an animal shelter for dogs and cats, with book and lyrics by Catya McMullen and direction Michael Raine at The PIT downstairs lounge: Locked Up B*tches

[FREE] 11:15 pm ($5): On Christmas week, take this opportunity to jump on stage and jam with improv veterans—who tonight include members of group Higgins, and possibly a bunch of others from the previous extravaganza (see 7:30) at the UCB East theatre: The Longest Improv Jam of the Year