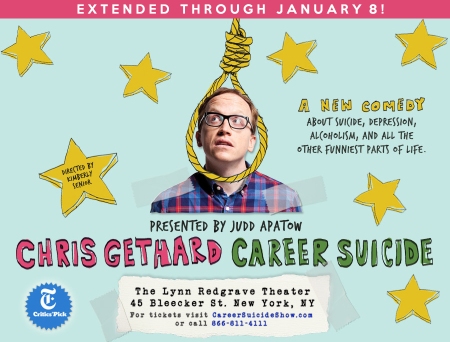 Today’s your last chance to see comedy genius Chris Gethard perform live a transcendently great one-man show about depression, perseverance, and the healing powers of laughter, love, and medication, seamlessly blending stand-up and storytelling in a way that creates a deep, poignant, and hilarious experience as wonderful as virtually anything currently playing on NYC stages—and that I’m guessing will end up as an HBO special, finally propelling Chris into the top tiers of show biz. Don’t miss today’s final performances of Chris Gethard: Career Suicide (4:30 pm & 7:30 pm; $28-$48—use code BBOX20 for discounts based on seat location;  The Lynn Redgrave Theater at 45 Bleecker Street, right next to the #6 subway’s Bleecker Street stop)

7:30 pm ($5): Dana Shulman and friends are improv group Student Driver, which hosts two indie improv troupes making up scenes and then performs itself, all at The PIT downstairs lounge: Student Driver Indie Road

8:30 pm ($5): Jamie Cummings (Comedy Central, MTV) performs a solo show in which “after 10 years of competition, the fourth-ranked Elvis impersonator in the greater Minneapolis-St. Paul metropolitan area has told himself ‘It’s now or never.’ The only things standing between him and Taking Care of Business are his rival, his Momma and his talent. Complete with singing and dancing” at The PIT Underground: The King & Me

[$] 8:30 pm ($18): A well-intentioned but overly conceptual play from enormously likeable writer/actor Augie Praley that aims to both dissect and pay homage to Thornton Wilder’s Our Town, with a cast of nearly 20 actors, at The PIT Mainstage: Looking Back, It May Not Have Been Ridgefield High’s Best Production of Our Town

8:30 pm ($5): Over a dozen improvisors make up scenes while you optionally munch on free popcorn at Brooklyn’s The Annoyance Theatre (367 Bedford Avenue; take J/M/Z to Marcy Avenue or L to Lorimer Street): Popcorn Hour

[FREE] 9:00 pm: Group Medusa turns a calamity selected by the an audience member into an improvised documentary live on stage at The Creek upstairs theatre in Queens’ LIC (10-93 Jackson Avenue): Medusa Presents Improv Against Humanity

9:30 pm ($3): Open-mic comedy, with 3-5 minutes per walk-in performer who signs up (first come, first serve), at The PIT Underground hosted by Will Neville: Amateur Night at the Gemini

This entry was posted on Sunday, January 8th, 2017 at 12:04 pm and is filed under Best New York Live Comedy Shows. You can follow any responses to this entry through the RSS 2.0 feed. You can leave a response, or trackback from your own site.