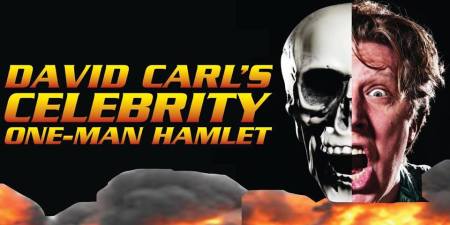 Charismatic and hilarious rising star David Carl transforms into Gary Busey—and portrays child-like Busey doing a one-man version of the psychologically complex masterpiece Hamlet. The result is consistently inventive, joyful, and laugh-out-loud funny. This was my second favorite show—out of 196—at the 2014 FringeNYC, went on to further acclaim at the Edinburgh Fringe Festival, and is one of the funniest shows in New York, period. After touring the country, David is reviving his show for just two performances in NYC, tonight and tomorrow. Don’t miss this wonderful opportunity to experience what was previously titled Gary Busey’s One-Man Hamlet (As Performed by David Carl), but for legal reasons is now David Carl’s Celebrity One-Man Hamlet (8:00 pm tonight and Tuesday, $20, The PIT Loft at 154 West 29th Street)

7:30 pm ($5): Improvisors who include Ronny Pascale (PIT Associate Artistic Director, co-producer of the superb Unauthorized! series and Solocom) make up plays on the spot based on audience suggestions at The PIT Mainstage: Scene Work: Improvised One Act Plays

[TOP PICK] 8:00 pm ($7): At the UCB Chelsea theatre, Natasha Vaynblat plays motivational speakers, life coaches, and sad sacks on her road to self-improvement: Self Help Your Self, Help!…

…and in the second half of this double-bill, sketch group Nipsey explains how things work in Nipsey Presents Science

9:30 pm ($5): Improvisors make up scenes with the lights turned off, using everyday objects to add layers of sound—like a radio play created on the spot—at The PIT Mainstage: Improv in the Dark

[TOP PICK] 10:30 pm ($7): Storytellers share their true “coming out” tales, and then improvisors make up either a play or a musical based on each story at The Magnet theatre: Thank You For Coming Out: An LGBTQ Event

[FREE] 6:00 pm: An improv jam celebrating diversity in comedy that lets you sign up to play in 7-minute montage sets with improv veterans at The Magnet theatre hosted by Nicole Lee & Art Cai: Diversity Improv Jam

This entry was posted on Monday, January 9th, 2017 at 11:57 am and is filed under Best New York Live Comedy Shows. You can follow any responses to this entry through the RSS 2.0 feed. You can leave a response, or trackback from your own site.