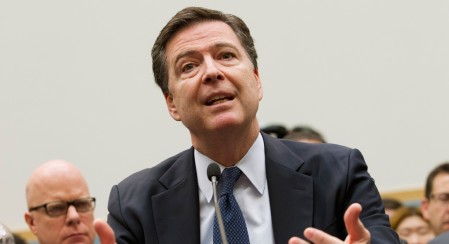 Jim Comey is just a letter away from “Comedy.” Watch him testify before the Senate Intelligence Committee this morning on MSNBC, CNN, ABC, CSPAN, etc; and then experience jokes about the potential impeachment aftermath tonight on Comedy Central’s The Daily Show at 11:00 pm and The President Show at 11:30 pm, late night talk shows….and on stage.

7:00 pm ($7): A one-man sermon about improv by “Rev. Deuce Hansbury” that treats improv like a religion and invites all audience members to join it at The PIT Mainstage: Mega-Team of Improv

7:30 pm ($7): After each stand-up performs, you and the rest of the audience get to ask them questions about their jokes, with tonight’s comics Kaytlin Bailey, Rachel Lenihan, Sagar Bhatt, Brian Bahe, and Albert Kirchner performing at Astoria Queens’ QED: A Place to Show & Tell (27-16 23rd Avenue) hosted by Kevin Froleiks & Sam Bourne: Press Conference

7:30 pm ($7): The writers of Passport Control, a comedic political talk show with a Middle East slant, come out from behind the scenes to perform stand-up, sketch, and/or characters at The PIT Underground hosted by Mehdi Barakchian (co-host of Brunch Night, improv group Kibbles and Bits): Passport Control Writer’s Showcase

[TOP PICK] 8:00 pm ($10): A burlesque comedic play paying homage to the tropes of Adult Swm’s animated series The Venture Bros.: “Doctor Jonas Venture has used Grover Cleveland’s Presidential Time Machine to go forward in time to check out how his son, Doctor Rusty Venture, has progressed with the family legacy, only to discover that Rusty has shot it all to hell! Rusty has rented out the lab to The Hotsy Totsy burlesque show for extra cash, and both friends and foe alike are begging for stage time. Can good and evil co-exist in the world of burlesque?” Find out at The Slipper Room (167 Orchard Street) spearheaded by Cherry Pitz (a.k.a. sharp storyteller Cyndi Freeman; The Colbert Report, Moth StorySlam champion, two-time FringeNYC award winner, star burlesque performer) and Brad Lawrence (Moth GrandSlam Champion): Hotsy Totsy Burlesque Tribute to The Venture Bros.

8:00 pm ($7): The greatest science fiction anthology radio show of all time was X Minus One. Improvisors who know their genre history created this show in which they make up scenes of awe, mystery, and wonder at The PIT Mainstage co-starring the spectacular Rachel Scherer, with sound design & foley effects from Frank Todaro, and an opening musical set from improv singer Robin Rothman Taylor & improv pianist Rachel Kaufman: X Plus One

[TOP PICK] 9:30 pm ($7): At the UCB Chelsea theatre, musical comic Eric Gersen attempts to move himself up to the first page of search results for his name on Google: Gersenality: One Man’s Search for Google Greatness…

…and in the second other of this double bill, Lindsay Brill & Janet Silverman perform a two-woman play about being trapped in our health system: Urgent Care

This entry was posted on Thursday, June 8th, 2017 at 10:38 am and is filed under Best New York Live Comedy Shows. You can follow any responses to this entry through the RSS 2.0 feed. You can leave a response, or trackback from your own site.