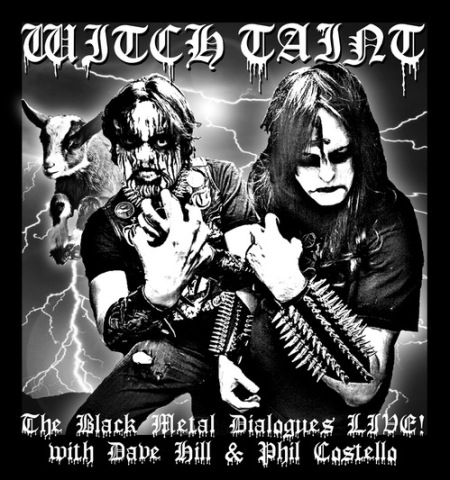 Dave Hill (one of the most original and hilariously sharp alternative comics in the country; @midnight, Inside Amy Schumer, Full Frontal with Samantha Bee, The Unbreakable Kimmy Schmidt, This American Life; host for HBO and Cinemax; host of WFMU’s The Goddamn Dave Hill Show; books Tasteful Nudes and Dave Hill Doesn’t Live Here Anymore; comedy album Let Me Turn You On), Phil Costello (Dave’s bandmate in groups Valley Lodge and—with Moby—Diamondsnake), and Shane Torres (fresh, hilarious stand-up; Conan O’Brien, IFC’s Comedy Bang Bang) perform Dave’s epic email exchange with a Norwegian black metal record label while pretending to be “Lance, a teenager living with his parents in Gary, Indiana who also just so happens to be the lead singer and sole member of the most extreme, brutal, and Satanic black metal band of all-time, WitchTaint, and hopes to get signed on the strength of one excruciatingly bad song called Necrodreamraper.” To get a feel, visit Dave’s website devoted to these emails, The Black Metal Dialogues, and then come enjoy the stage version: Witch Taint Live (8:00 pm; $10, Brooklyn’s Union Hall at 702 Union Street; take R subway to Union Street)

[TOP PICK] 7:00 pm-Midnight ($10 for the entire evening): Improv duo The Sufferettes at 7:00 pm, four veteran house improv groups starting at 8:00 pm, themed improv show Junk Food (embracing pure absurdity and silliness, making you laugh without thinking) at 10:00 pm, and improv competition Inspirado at 11:00 pm, all for just $10 at The Magnet theatre: The Magnet’s Thursday Night Out

[$] 7:30 pm ($43.75 & 2-drink min.) An Iranian-American stand-up (for a sample set, please click here) who starred in three Showtime specials, co-stars in CBS’ Superior Donuts, and as an actor has also performed on ABC, FOX, HBO’s Curb Your Enthusiasm, NBC’s The West Wing and ER, and many other shows & feature films, headlines tonight through Saturday at the Carolines Comedy Club: Maz Jobrani

[$] 7:30 pm ($35 & 2-drink min.) A former MTV icon you either love or actively avoid headlines through Saturday at the Carolines Comedy Club: Tom Green

[TOP PICK] 8:00 pm ($7): At the UCB Chelsea theatre, Colin O’Brien (sketch comedy group O.S.F.U.G.) & Michael Wolf (showrunner of MTV series After Hours with Josh Horowitz; sketch comedy groups O.S.F.U.G. and Nancy) teach you how to become an author, directed by Joanna Simmons: How to Write a Book: The Play…

8:30 pm ($7): Group Hot Boss hosts comedy about jobs at The PIT Underground capped by an audience member excoriating his or her boss and coworkers: Hot Boss: Happy Hour

9:00 pm ($10): A two-person play by Courtney Ulrich & Ryan Wesley in which “five years after the fateful Ham Factory fire of 2012 that cut short her acting career, former Ham Factory owner turned Life Coach Jon Ham helps Courtney on her journey of redemption as she remounts her unauthorized one-woman adaptation of The Miracle Worker titled The Worker’s Miracle” at The PIT Loft (154 West 29th Street): Courtney, Ryan, and The Great Ham Factory Fire of 2012

10:00 pm ($7): The gal members of indie improv group Rebel 5 perform, and host comics who are female and/or LGBTQ, at The PIT Underground: Kitty Come Lately—Queens and Kweens

11:00 pm ($7): Improv and stand-up (details not announced) “dumped here for your pleasure” at The PIT Mainstage: Improv Tonight

This entry was posted on Thursday, June 15th, 2017 at 9:45 am and is filed under Best New York Live Comedy Shows. You can follow any responses to this entry through the RSS 2.0 feed. You can leave a response, or trackback from your own site.