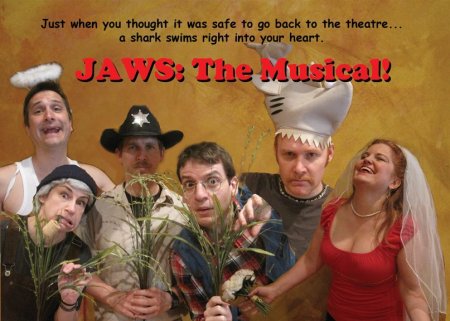 John Flynn continues to star as a shark looking for love in Jaws: The Musical

[TOP PICK] 6:00 pm ($10 plus 1 drink min.): “Just when you thought it was safe to go back to the theater, a shark swims right into your heart.” Beloved storyteller/stand-up/sketch comic John Flynn stars as a singing shark, along with Laura Daniel, Brett Douglas, Wayne Henry, Jason Salmon, and Suzanne Stein in this 40-minute musical written & composed by Wayne Henry at the Broadway Comedy Club (318 West 53rd Street, between 8th & 9th Avenues), running tonight, Saturday, and next weekend: Jaws: The Musical

6:00 pm ($5): Improv troupes The Heathers, Sad Kids, and Swagu at The Magnet kicking off your Saturday evening: The Rundown

7:30 pm ($7): Andrew Yurman-Glaser and Dustin Drury first go solo and then join forces at The Magnet as improv duo Upstate

[FREE] 8:00 pm: “Want to see your favorite stand-up comics get slapped by Satan himself? He only hosts bringer shows, but join Matt Wayne and Doug Smith as they step into the Big Man’s shoes and put NYC’s finest through comedy purgatory. Hula-hoops, celebrity impressions, unwanted audience participation, all incorporated into each performance! Will they triumph or will the nether world eat their souls? Come see for yourself in this monthly showcase” at Queens LIC’sThe Creek upstairs theatre: See You in Hell

[TOP PICK] [FREE] Midnight: The delightful Amber Nelson (sketch troupe Thunder Gulch, co-host of Late Night Stand and Mustache Party) debuts with Kat Toledo in a sketch show Amber mostly wrote (with help from Jill Morris, Kat Toledo, and Jeff Seal) that “explores the moment before a breakdown, the breakdown, and what happens after” at The Creek upstairs theatre in Queens’ Long Island City: Snapped

This entry was posted on Saturday, July 7th, 2012 at 1:01 pm and is filed under Best New York Live Comedy Shows. You can follow any responses to this entry through the RSS 2.0 feed. You can leave a response, or trackback from your own site.