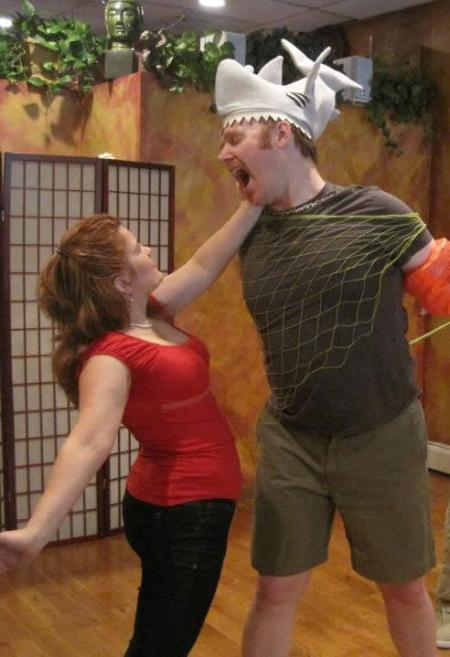 [TOP PICK] 8:00 pm ($5): “For over a year, Patrick Waldo scrawled his moustache tag on countless advertisements around New York City, entertaining commuters and causing thousands of dollars in damage. After a three month investigation, the NYPD put an end to his spree when they arrested Waldo under felony charges of graffiti, criminal mischief, and fucking shit up,” written & starring Patrick Waldo, and directed by Nate Dern & John Flynn: Moustache Man: Confessions of a NYC Graffiti Artist…

[TOP PICK] [FREE] 8:00 pm: Politically incorrect stand-ups compete in this unique show for which each comic performs a set and then has to provide biting commentary on a popular online video. The audience then votes on who was the most savagely funny and has won the right to return the following month. It all happens at The Creek’s upstairs theatre in Queens’ Long Island City hosted by Mike Feeney: On the Offensive

8:00 pm ($5): Two singing improv troupes make up entire musicals on the spot in this double-bill at The PIT downstairs lounge: Hemlock and Dagger

8:00 pm-MIdnight ($7 for the entire evening): The Magnet house troupes Featherweight, Junior Varsity, The Boss, and Hello Laser performing improv for two hours, followed at 10:00 pm by The Blackout (scenes are edited by blackouts created by the director in the booth, and the stage is set by the improvisers from the previous scene), and then at 11:00 improv competition Inspirado (like UCBT’s Cage Match, but with a game-like challenge component), tonight featuring Weekend of Regret vs. Rubin: The Magnet’s Night Out

8:00 pm ($5): Sketch comedy from troupe Secrets Club at The PIT downstairs lounge: A Matter of Trust

[MEGA-TOP PICK] 9:30 pm ($5): John Flynn (superb storyteller/actor/host; The Nights of Our Lives, host of storytelling show Oh, Hey Guys!) is one of the most underrated comics in NYC. Tonight John will address that at UCB Chelsea by performing his best stories and stand-up for posterity before an enthusiastic audience—which hopefully will include you: John Flynn’s Live Comedy Album Taping

[TOP PICK] [$] 10:00 pm ($22 & 2-drink min.) A razor-sharp stand-up who’s performed on HBO’s Bored to Death and Down and Dirty, as well as FX’s Louie and radio show Opie & Anthony, starred in his own Comedy Central Presents half-hour special, created the comedy CDs The Depression Auction and Return of the Depression Auction, and co-hosts the weekly NYC stand-up show Righteous Kill headlining tonight and Thursday at the Carolines Comedy Club: Joe DeRosa

[TOP PICK] 11:00 pm ($5): One of the country’s finest improv troupes, Doppelganger (Sasheer Zamata, Nicole Byer, and Keisha Zollar), goes up against Improv troupe Good Dad (comprised of such superstars as Neil Casey, Fran Gillespie, and Jon Gabrus) in a titantic competion for audience laughs and votes at UCB Chelsea for the raucous Cage Match

[TOP PICK] 11:00 pm ($10): “Jack Dishel is best known as a songwriter and musician, touring all over the world performing as Only Son and also playing lead guitar in The Moldy Peaches. Last year he exploded onto the comedy scene, doing multiple runs of hour-long shows at the Sidewalk Cafe and The PIT—without ever repeating material. It’s sometimes hilarious, sometimes dark, but always interesting. Whether speaking as one of his many characters or in his own voice, his ideas come through loud and clear, and it’s a fast hour. Let’s see what happens when Dishel brings the drunken night club insanity into The PIT upstairs theatre:” Jack Dishel: Drinking & Talking

This entry was posted on Thursday, January 3rd, 2013 at 1:35 pm and is filed under Best New York Live Comedy Shows. You can follow any responses to this entry through the RSS 2.0 feed. You can leave a response, or trackback from your own site.