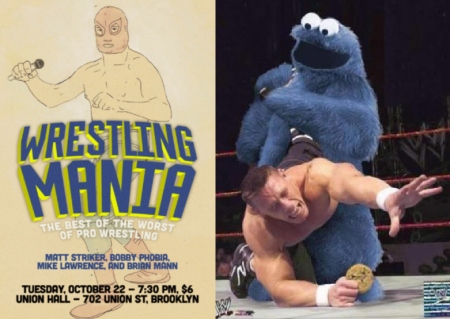 Classic oddball scenes of pro wresting are screened and made fun of at Brooklyn’s Wrestling Mania: The Best of the Worst…

…and Anthony Atamanuik performs hypnosis at The Tony Show

[TOP PICK] 7:00 pm ($5): Harmon Leon (author of six books, including The Infiltrator) has made a career of going undercover and infiltrating extremist subcultures, ranging from white supremacist hate groups to the Christian Wrestling Federation in Georgia (where they bodyslam for Jesus). In this multimedia show, “he brings to life such horrors as the America’s Most Beautiful Baby Contest, costarring on a hidden camera show with OJ Simpson, and riding shotgun with crime scene cleaners” at The PIT downstairs lounge: Yank Me

[TOP PICK] 7:00 pm-10:00 pm ($7 for the whole evening): In this 3-hour extravaganza, five of The Magnet’s singing improv groups make up a musical on the spot based on an audience suggestion: Magnet Musical Megawatt

[TOP PICK] 7:30 pm ($6): The debut of one of the most fun ideas for a monthly show I’ve heard in a long while, “bringing together a mix of amateur, semi-pro, and pro wrestlers to the stage alongside New York’s funniest comedians and commentators to watch and lampoon the best of the worst of 80s and 90s pro wrestling.” Guests tonight include Mike Lawrence (nerd persona but razor-sharp mind has made this stand-up a rapidly rising star; Conan O’Brien, Jimmy Fallon, Comedy Central Half Hour, John Oliver’s NY Stand-Up, comedy album Sadamantium). It all happens at Brooklyn’s Union Hall hosted by Brian Mann: Wrestling Mania: The Best of the Worst of Pro Wrestling

7:30 pm-9:15 pm ($5): Long form improv known as The Harold from UCB Chelsea house groups Grammer, Sherlock & Cookies, and Goodgirl at this first half of Harold Night

8:00 pm ($5): A two-gal sketch show about dating from Angela Spera & Laura Lane at The PIT downstairs lounge directed by Keisha Zollar: This Is Why You’re Single

9:15 pm-Midnight ($5): Long form improv known as The Harold from UCB Chelsea house groups Big Margaret, Graceland, and The Regulars at this second half (continued from 7:30 pm) of Harold Night

[TOP PICK] 9:30 pm ($5): Brilliantly innovative comic Anthony Atamanuik (Death by Roo Roo, 30 Rock, Conan O’Brien, The Nights of Our Lives) plays oddball characters in a mix of sketch and improv, tonight hosting as “famed hypnotist Clyde Mesmer who thrills with his mind-bending skills. Clyde can channel spirits from the beyond, entrance women into his embrace…and doesn’t really bother with the rest of the audience, just women and the dead” at the UCB East theatre: The Tony Show

[TOP PICK] [FREE] 8:00 pm: This weekly open-mic storytelling show is truncated to an hour tonight, allowing each performer 6 minutes to tell a compelling and funny tale at Queens LIC’s The Creek downstairs lounge with host Jake Hart: The Dump

[TOP PICK] [FREE] 10:15: Sign up at 9:30 pm for the opportunity to make up a musical on the spot with The Magnet improv group Smooth: Magnet Musical Improv Mixer