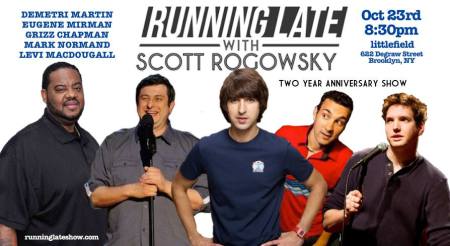 [TOP PICK] 7:00 pm ($5): Mike Birbiglia’s Dream is both a reference to Mike’s hit play & film Sleepwalk With Me, and to the group of improvisors he’s gathered being a “dream team” for making up scenes springboarding off his stories. Tonight at UCB Chelsea Mike spins tales for SNL’s Mike O’Brien, Chris Gethard, Christina Gausas, Tami Sagher, and/or Aidy Bryant: Mike Birbiglia’s Dream

7:00 pm to 12:30 am ($7 for the entire evening): Five and a half hours of improv from eight groups at The Magnet theatre: Magnet Megawatt

[TOP PICK] [$] 7:30 pm ($15 in advance online or $20 at the door): Four funny people tell amazing stories. Three of the tales are absolutely true…but one of them is a pack of lies. The audience then asks questions to try and identify the fibber—and everyone who does gets a free t-shirt! This evening’s yarn-spinners are Elna Baker (genius storyteller, and bestselling author of comedic book The New York Regional Mormon Singles Halloween Dance; NPR’s This American Life; writer for Glamour, Elle; for sample tales, please click here), Mark Katz (former White House speech writer, author of Clinton & Me), James Braly (NPR’s This American Life, author of Life in A Marital Institution), and host host Andy Christie (The New York Times, NPR, Moth GrandSlam champion, exceptionally nice guy). Come to The Writers Room (740 Broadway, on the 12th Floor) and let these authors attempt to mislead you at The Liar Show

[TOP PICK] 8:00 pm ($5): Improv troupe Punctual Drunks interviews an audience member about his or her favorite fairy tale, and then picks up the story where it left off so you can find out how it really ended, at The PIT downstairs lounge: Punctual Drunks & Friends

[TOP PICK] 10:30 pm ($5): The instructors of UCB’s classes include some of the finest improvisors in the country. In this weekly show a bunch of them get on stage at UCB East, along with hosts Betsy Stover and Ari Voukydis: Hot for Teacher: The UCB Faculty Show

[FREE] 11:00 pm: Charla Lauriston and guest host Ryan Beck wrangle as many as a dozen comics packed into 75 minutes performing stand-up, improv, sketch, and occasionally acts that defy categorization. The level of talent can vary wildly, but for some (like me), that’s part of the laid-back fun at UCB Chelsea (for tonight’s scheduled guests, please click here): School Night

7:00 pm ($2, which includes a free beer or water): Open mic stand-up providing a whopping 10 minutes per comic. Email PhoningItInMic@gmail.com with subject line Phoning Wednesday to sign up; or take a chance at lottery sign-up live between 6:45 and 7:45 at Brit Pack Studios (153 Lafayette Street, 3rd Floor) hosted by Lizzie Martinez: Comics Phoning It In

[FREE] 11:00 pm: Your opportunity to perform on the stage of UCB East with improv veterans, hosted by UCBT Harold Night house group Bucky and DJ Cipha Sounds: The Improv Jam

[FREE] 11:00 pm: Your chance to perform on stage with experienced improvisors at The PIT upstairs theatre hosted by Lucas Hazlett: Improdome

[FREE] 11:30: Sign up at 11:00 pm for the opportunity to make up scenes at The Magnet with group Call Tokyo: Magnet Improv Mixer