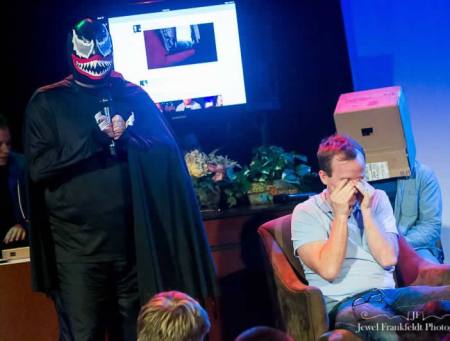 7:00 pm ($7): Improvisors make up scenes with the lights turned off, using everyday objects to add layers of sound—like a radio play created on the spot—at The PIT Underground: Bat-Prov: Improv in the Dark

8:00 pm ($7): At the UCB Chelsea theatre, musical comic Eric Gersen attempts to move himself up to the first page of search results for his name on Google: Gersenality: One Man’s Search for Google Greatness…

…and in the second other of this double bill, a faux TV episode by sketch group Nipsey in which “As a father/daughter duo, Albert and Corinne work great. As co-owners of a cigar store-turned-vape shop, they’ve got a lot to learn! And when the big Vape Expo comes to town Darcy, Gayle, and Heath have kooky ideas about how to make waves!:” Nipsey: Vape Lyfe

9:30 pm ($7): Improv group Astronomy Club—which includes Keisha Zollar and Jonathan Braylock—gets race-related stories from the audience and a guest monologist, and then makes up scenes based on those tales at the UCB East theatre: Astronomy Club: Let’s Talk About Race, Baby!

10:00 pm ($7): Each of 4 groups select improv forms from among 10 buckets and then make up scenes in the style selected at The PIT Mainstage: Forms From the Bucket

[MEGA-TOP PICK] [FREE; reservations go quickly, but you can probably get in if you arrive early and are okay with standing] 11:00 pm: Some of the finest comics in the world—who aren’t announced in advance, but it’s usually a great lineup and often an extraordinary one—at UCB Chelsea hosted by Aparna Nancherla (one of the very best stand-ups in the country; co-star of HBO’s Crashing; former writer for Seth Meyers; Conan O’Brien, @Midnight, Comedy Central Half Hour, comedy album Just Putting It Out There): Whiplash

6:00 pm ($5 for both comics and audience members, no drink min.): Open mic stand-up providing 5-7 minutes per comic, with each show running 1 hour and 45 minutes. Arrive 30 minutes before the show you want to be in to get on the signup sheet. This is a fine opportunity to perform at the only comedy club in the East Village: Eastville Comedy Club Open Mic