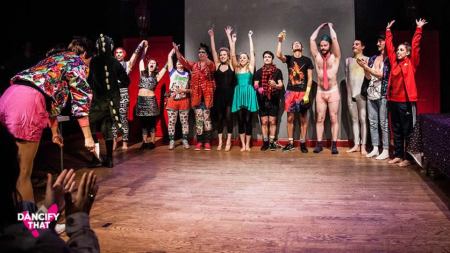 A unique game show in which an oddball Internet video is screened, and then over a dozen contestants have three minutes to prepare a dance routine inspired by what everyone just experienced. It’ll all be judged by comedy treasures Aparna Nancherla (one of the very finest stand-ups in the country; co-star of HBO’s Crashing and Netflix’s Master of None; former writer for Seth Meyers; Conan O’Brien, @Midnight, Comedy Central Half Hour, comedy album Just Putting It Out There; opens for Tig Notaro; hosts top weekly NYC stand-up show Whiplash) & Jo Firestone (staff writer for Jimmy Fallon; radio host of WFMU’s Dr. Gameshow, live-on-stage host of The Unexpectashow and The Incredible Game Show Showcase, co-author of #1 bestselling Punderdome: A Card Game for Pun Lovers): Dancify That! (8:00 pm, $15, The PIT Mainstage at 123 East 24th Street)

7:00 pm ($7): Anna Grace Carter drinks while describing the plot of an actual musical (could be famous or obscure), and then musical improvisors—who typically include Jay Malsky, Henry Koperski, and members of the groups [title of team] and/or Royals—attempt to recreate it based on her semi-drunken details at The PIT Mainstage: Drunk Musical: The Musical

7:00 pm pm ($7): A one-man show by Amanda Miller attempting to learn how to follow this advice: “We can’t stop ourselves from suffering, but we can learn how to suffer better” at The PIT Loft (154 West 29th Street): How to Suffer Better

[$] 7:30 pm ($12): Two seven-person one-night-only improv groups make up scenes to try to delight you at the UCB East theatre: The Blender

[$] 7:30 pm ($12): Two seven-person one-night-only improv groups make up scenes to try to delight you at the UCB Chelsea theatre,: An Improv Show

[$] 8:00 pm ($15): Greg Proops (Whose Line Is It Anyway?, @midnight) performs an hour of observations & thoughts for a live taping of his podcast at Brooklyn’s The Bell House (149 7th Street): Greg Proops is the Smartest Man In the World

8:00 pm ($7): “King Zebra has a full black cast (including Ray Morency from Off Top, David Bell, and Raquel Palmas), and we want to do an improv show based around the theme ‘black lives laughter'” at The PIT Loft (154 West 29th Street): King Zebra Safari

8:00 pm ($7): Michelle Drozdick performs an improvised one-woman show, with these rules: “Michelle interviews an audience member about an experience in her or her life. Then a gimmick is chosen at random from a hat, such as ‘Perform using a children’s show format’ or ‘Narrate from the perspective of the main character’s hopelessly out-of-date grandmother.’ What follows is a a fully structured plot and narrative,” all made up on the spot at the intimate PIT Attic (up the stairs behind the Mainstage): The Gimmick and You

9:00 pm ($10): Improvisors Sean Reidy & Sam Jackel first confess “very real things” to each other and the audience, and then use the details to create an entire town of characters on the spot at The PIT Underground: SEAM Presents “The Confession”

[TOP PICK] [$] 9:30 pm ($15): Highly talented hip-hop improv group North Coast attempts to create a Hamilton on the spot by making up a musical based on an audience suggestion of a famous historical figure at The PIT Mainstage: Anybody: An Improvised Historical Hip-Hopera

[TOP PICK] 11:00 pm ($7): Singing improvisors who love spy movies create on the spot “a highly confidential musical narrative” based on an audience suggestion at The Magnet theatre: The Agency: Musical Improv For Your Eyes Only

[TOP PICK] 11:00 pm ($10): New episodes of Saved by the Bell and Power Rangers are made up on the spot by improvisors wearing the costumes for these shows at The PIT Mainstage: 90s Night