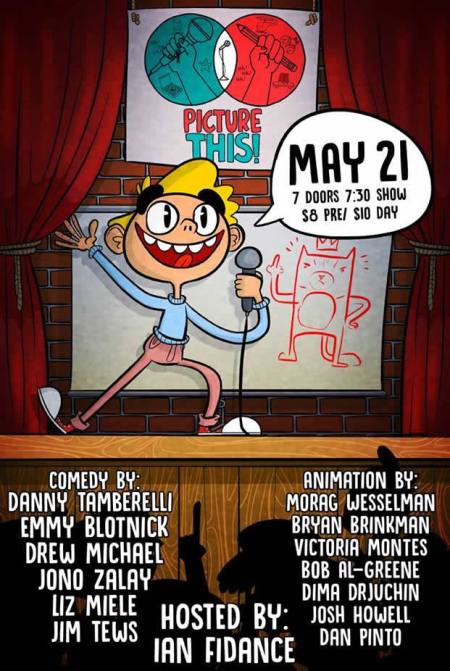 [$] 2:00 pm ($20): This musical with puppets is a family-friendly and interactive reinvention of the fairy tale The Three Billy Goats that urges the audience to work at improving the environment at The PIT Mainstage: Gruff!

[TOP PICK] 6:00 pm ($7): There’s nothing more unpredictable on a stage than an animal. In this show, pet owners perform improv along with their real-life pets at at The PIT Loft (154 West 29th Street): Pet Prov

7:00 pm ($5): Group Clyde performs a mix of sketch and improv at The PIT Mainstage: Hey Clyde

7:30 pm ($7): “Improvisers create scenes inspired by essays written about personal experiences and show that sometimes laughter really is the best medicine” at The Magnet theatre: You Are Not Alone: An Uplifting Show About Depression

[MEGA-TOP PICK] [$] [DISCOUNTED] 8:30 pm ($14.80 online using discount code BOX12, otherwise $18): My favorite FringeNYC 2016 show (out of over 60 seen) was a production taking place entirely inside a box, written & performed by breathtakingly talented sketch comic/actress/writer/singer Dominique Salerno (for my review, please click here). This amazing production is now enjoying a revival running Sundays at 8:30 pm at The PIT Mainstage through June 11th. Take advantage of this wonderful chance to experience The Box Show

8:30 pm ($7): A one-woman show by Jean LeBec in which she “breaks out of the traditional storytelling format and guides the audience through three stories of her life” at The PIT Underground: Swept Up

9:00 pm ($6): Two three-person groups of transplanted comics compete to determine “which will be accepted by the city and which will have to move back home” at Astoria Queens’ QED: A Place to Show & Tell (27-16 23rd Avenue) hosted by Brendan Busee: Graft vs. Host

9:30 pm ($5): Improv group Higgins looks at the Instagram photos of audience members and then uses them as springboards for comedy scenes at the UCB East theatre: Higgins: The Instagram Show

10:30 pm ($7): Short stories are used as springboards for improvised scenes in this improv form created by Louis Kornfeld at The PIT Underground: Fact or Fiction

[TOP PICK] 11:00 pm ($7): The debut of a show in which three five-member groups of comics compete in a Survivor-like game that tests them “in acting, writing, improvisation, character work, storytelling, and stand-up. The audience decides who goes to tribal council, but the tribe will actually vote and decide who is out of the competition” at The PIT Mainstage: Outwit, Outplay, Outlaugh: A Survivor Style Comedy Competition

9:30 pm ($5): Open-mic comedy, with 3-5 minutes per walk-in performer who signs up (first come, first serve) at The PIT Underground, hosted by Will Neville: Amateur Night at the Gemini