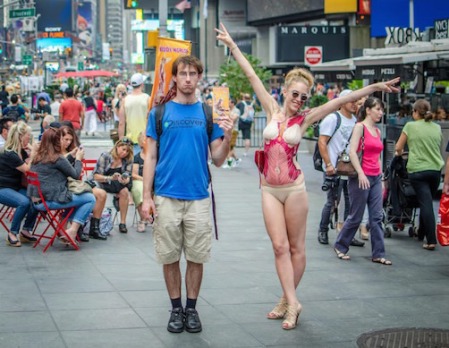 …and speaking of storytelling, David Lawson tells fascinating tales about the three years he made his living handing out flyers in Times Square…while competing with a wide variety of unusual characters for the attention of tourists. This one-man show—which David is about to perform at festivals around the country—is funny, real, and recommended: Flyer Guy (7:30 pm, Free!, Offside Tavern at 137 West 14th Street) 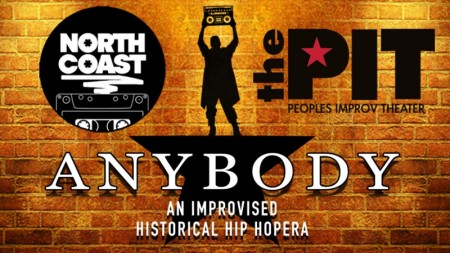 Highly talented hip-hop improv group North Coast attempts to create a Hamilton on the spot by making up a musical based on an audience suggestion of a famous historical figure: Anybody— An Improvised Historical Hip-Hopera (9:30 pm, $15, The PIT Mainstage at 123 East 24th Street)…

…or marvel at world-class singing improvisors Evan Kaufman & Rebecca Vigil interviewing an audience couple about their love life and then turning it into a musical—with breathtaking skill (see my review of their award-winning FringeNYC 2015 shows here). Plus tonight offers the extra treat of music from a hot dog DJ. I highly recommend the phenomenal Your Love, Our Musical (8:00 pm; $10, which is super cheap—;this show has regularly sold out at $18 at other venues; The PIT Mainstage at 123 East 24th Street)

This entry was posted on Friday, July 21st, 2017 at 6:41 am and is filed under Best New York Live Comedy Shows. You can follow any responses to this entry through the RSS 2.0 feed. You can leave a response, or trackback from your own site.