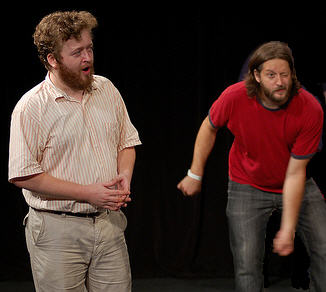 [FREE] 2:00 pm: “Something worth watching. Could be a movie, or a TV show. Might be populist and unapologetically entertaining, or hard to find and harder to understand. But you will always leave saying, ‘I am glad that I saw that.'” Hosted by The PIT’s Chris Grace, today’s free film is the director’s cut of an amazing though not exactly funny 1984 feature: Amadeus

[TOP PICK] 8:00 pm ($5): Neil Casey & Anthony Atamanuik, both genius members of Death by Roo Roo, perform the jaw-dropping feat of making up an entire feature film as The Two-Man Movie; and comedy geniuses Gavin Speiller (Death by Roo Roo, Rogue Elephant), Ben Rodgers (Reuben Williams, co-host of Cage Match), and Jon Gabrus (Conan O’Brien, Best Week Ever, The Nights of Our Lives) comprise one of the most hilarious improv trios in NYC as troupe Outlook of the Poet

[MEGA-TOP PICK] [$] [DISCOUNTED] 8:00 pm ($35.50 with discount code BOX): Mike Birbiglia has long been one of the finest stand-up comics in the country, with credits including the hour-long Comedy Central special What I Should Have Said is Nothing; two Comedy Central Presents half-hour specials; multiple appearances on David Letterman and Conan O’Brien; and the comedy CDs Two Drink Mike and My Secret Public Journal—Live. But what puts Mike in a class all his own is a unique style he’s developed that mixes the razor-sharp hilarity of the finest stand-up with the depth of emotionally moving theatre. Mike pioneered this approach with his previous off-Broadway hitSleepwalk with Me (which he then turned into a New York Times bestselling book, Sleepwalk with Me & Other Painfully True Stories); but he’s raised his game to a whole new level with this show, which is regularly selling out—for good reason. The $35.50 (discounted via code BOX) price is about what you’d pay at a comedy club…and it’ll buy you one of the richest experiences you’re ever likely to receive from art. To enjoy world-class laughs while being taught how to value what’s truly important, grab tickets while you can at the Barrow Street Theatre (27 Barrow Street, just one block from the #1 subway’s Christopher Street stop); this utterly brilliant one-man show is slated to run only through May 15th: Mike Birbiglia: My Girlfriend’s Boyfriend

[FREE] 9:00 pm: Will Hines (UCBT superstar), Joe Garden (Features Editor of The Onion, co-author of The Devious Book For Cats and The Dangerous Book For Dogs), Paul Mecurio (The Daily Show, Comedy Central Presents), Ilana Glazer (Broad City), and Michele Carlo (The Moth) performing at this free weekly show at the Luca Lounge (222 Avenue B off 14th Street) hosted by Sharon Spell: Shrink