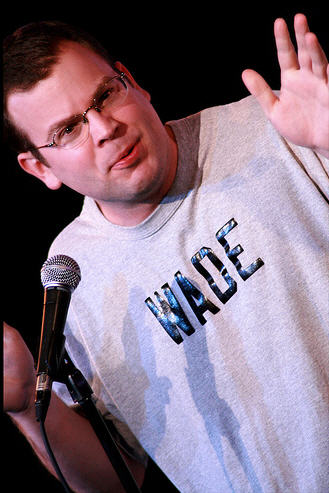 ...and Abbi Jacobson concludes her run of "Welcome to Camp"

[FREE] 6:00 pm: An open-mic show on a lottery system (sign-ups start at 5:30 pm) at The Creekupstairs theatre in Queens’ Long Island City with hosts Mike Recine and Annie Lederman: The Shinebox

[TOP PICK] 7:00 pm: “What if the two worst actors on the planet taught a workshop? And what if they were totally fucking crazy? Join Livia Scott as Collette Priester, ‘The Empress Of Dinner Theater,’ and Sean Crespo as Rodney DeGiles, ‘A younger, sexier Gary Oldman with more range,’ as they take you through a free audit of The Gold Star Acting Workshop. Prepare to be traumatized and like it:” Raging Triumph

7:00 pm ($5): A comedic narcissist does a show about how awesome he is: An Evening with Neil Michaels

[TOP PICK] 7:30 pm ($10): Young Abbi Jacobson (Broad City) has the makings of a new UCBT star performing a one-woman show in which she engagingly plays a variety of oddball characters you might encounter at summer camp—and if you haven’t seen this yet, don’t miss it, because this performance concludes Abbi’s run: Welcome to Camp!; plus in the other half of this double-bill, the appealing Veronica Osorio makes her first attempt to fly solo by performing as five gals who win a chance to be The First Woman on the Moon

[TOP PICK] [$] [DISCOUNTED] 8:00 pm ($20 online using discount code BBOX1): One of the very best shows at FringeNYC 2010 was an award-winning comedy from NYC’s own Faye Lane, a luminous storyteller and singer who will charm your socks off—and possibly give you a moon pie to boot—at the Soho Playhouse’s downstairs Huron Club. This marvelous event recently received a 2011 Bistro Award for Musical Comedy and 2011 MAC Award for Special Production. Please read my review by clicking here, watch Faye make a pecan pie by clicking here, and then take advantage of this revival running Friday nights to experience the hilarious and unforgettable Faye Lane’s Beauty Shop Stories

[TOP PICK] 8:00 pm ($5): Comedic storytelling from Ophira Eisenberg, Bradford Jordan, and Rob Shapiro at The PIT’s basement lounge on the topic of The Trials and Tribulations of Trying to be Cool

8:00 pm ($10): An improv troupe making up a musical on the spot after a friendly greeting: Hello

[TOP PICK] 9:30 pm ($10): Sketch duo Chris O’Neill and Paul Valenti describe themselves as “vaudeville gold for a 2011 crowd.” Whatever. They’re funny. Especially the bit with the nose. Come catch their latest material tonight at The Chris and Paul Show

[TOP PICK] 10:00 pm ($7): Singing improvisors, including such world-class performers as the breathtakingly talented Tara Copeland, using an interview with an audience member to craft The Made-Up Musical

[$] 10:30 pm ($27.25 & 2-drink min.) A comic who’s performed a Comedy Central Presents special and is a cast member of Ugly Americans, and has also appeared on Last Comic Standing, Showtime, and VH1, headlining tonight and Saturday at the Carolines Comedy Club: Kurt Metzger

11:30 pm ($5): An unusual mix of burlesque dancing and improv “in the daring and campy world of three struggling burlesque beauties on the stage and in the dressing room of Larry Lazlo’s Lamplighter Lounge, where “silly, sexy, and titillating fun awaits you:” Go Kitty: A Burlesque Improv Revue