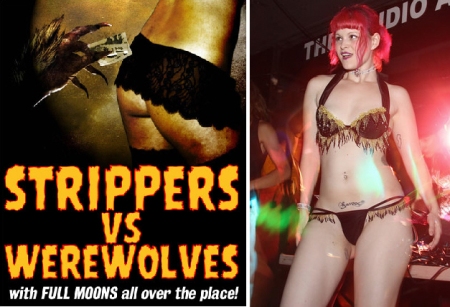 Lectures on The Werewolf's Guide To Life, obessions with AA meetings, and more are covered at Adult Education; burlesque star Dangrrr Doll is among the performers at Brooklyn storytelling show And I Am Not Lying...

[TOP PICK] [FREE] 7:00 pm: Witty writers offering delightfully wry lectures about this month’s topic “Transformation,” which range from The Werewolf’s Guide To Life to How to Be a Recovering Alcoholic When You’re Not an Alcoholic But Enjoy AA Meetings, at the Housingworks Bookstore Cafe for Charles Star’s comedic show Adult Education

[TOP PICK] 7:00 pm ($5): “Jews in comedy have been ignored for too long. To combat this trend, The Magnet’s Jewish house team members have formed a Jewish super-group that will be performing around Jewish high holidays. Their Jewish shows will be based on Jewish monologues from a Jewish Rabbi about the upcoming Jewish holiday. For Purim we have monologist Rabbi Elli.” Among this small army of Jews is typically improv master Ed Herbstman—which is reason enough to come and enjoy The Chosen Ones

8:00 pm ($5): This one-woman show at The PIT upstairs theatre “follows Leanne’s journey from Waukegan, Illinois to Vegas, baby! Doesn’t every woman want to move to Vegas, sell guns, and get married a few times? It would be completely made up if it weren’t totally true:” Lady Luck is a Whore

8:30 pm ($5): In this double-bill, each of two of The Magnet’s singing improv troupes will make up a musical on the spot based on an audience suggestion: BEEES! and Mint Condition

[FREE] 10:15 pm: In this free Magnet show, audience members can join in with musical improv troupe Mint Condition to make up stories in song on the spot: Musical Magnet Mixer