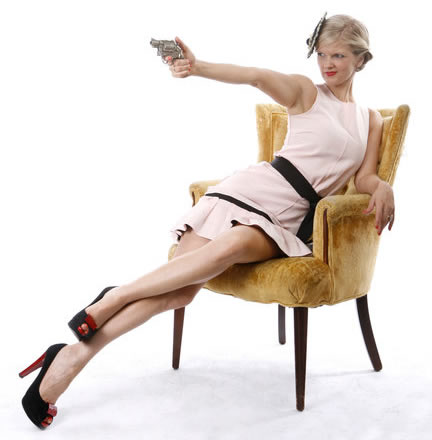 Mayhem will be wreaked by Arden Myrin… 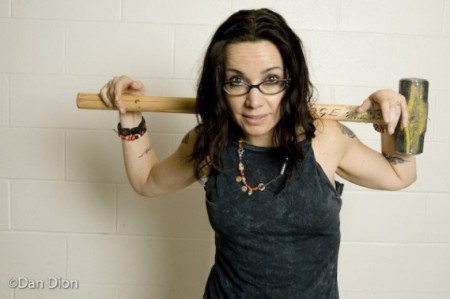 …and Jena Friedman (writer for David Letterman), Michael Patrick O’Brien (writer for SNL), and more will form a human chain of laughter at the return of Jena’s Entertaining the Bartender

[FREE] 6:30 pm: Open-mic storytelling, with each of the four audience members chosen from the bucket of names getting to tell tales for 7 minutes each at The PIT downstairs lounge along with host Jake Hart: The Dump

7:00 pm ($5): Sketch troupe Shelby Company performs oddball bits for this Magnet sketch show show that in the past has included two-timing monsters and presidential ninjas: Ephemerama

[MEGA-TOP PICK] 8:00 pm ($5): Scott Adsit (cast member of 30 Rock, and co-writer/director/producer & cast member of Adult Swim’s awesome & Emmy-winning Moral Orel) teaming up with fellow 30 Rock actor John Lutz (who previously spent six years as a staff writer forSaturday Night Live) to form a super-smart and hilarious star improv duo that’s become one of the very best attractions at UCB Chelsea and should not be missed (in fact, attending this show is part of how I plan to celebrate my birthday today…): John & Scott

8:30 pm ($5): At The Magnet, a mini-play from Chris Nester & Ross Taylor about aspiring Country Western musicians: The Oakwood Boys

[TOP PICK] 9:00 pm ($8; or free with proof of unemployment or of employment as a comedian, or an awkward Facebook message to Jena the day of the show “but seriously, it has to be awkward”): The return of this monthly stand-up show from wonderful dark humor comic Jena Friedman (staff writer for David Letterman), with tonight’s guests Michael Patrick O’Brien (staff writer since 2009 for Saturday Night Live; 7 Minutes in Heaven), Adira Amram (fresh, hilarious rising star singer/songwriter; co-star with Kurt Braunohler of Night of the Living; winner of the 2011 ECNY Award for Best Musical Act), Nick Vatterott (Conan O’Brien, Jimmy Fallon, MTV, Second City), Kate Berlant (MTV, CNN, host of Crime & Punishment Tuesdays at Cake Shop), and—my favorite, verbatim from Jena—”my ex-boyfriend Dale (JDate, Christian Mingle, Craigslist),” plus music from Jefferson Hamer (Sound of Young America), and “a surprise guest,” all performing at the Ace Hotel(20 West 29th Street, between Fifth Avenue & Broadway): Entertaining the Bartender

9:30 pm ($8): From the wonderful Jen Nails’ Do It Yourself class, the debut of two one-woman shows at The PIT upstairs theatre. First up is Laurie Lattimer in “a story about an alcoholic father, a perfectionist mother, seven weddings, four divorces, one funeral, two boroughs, and the crossing of one very big ocean:” Things Would Be Different; and then Cara Kilduff describes going “from babysitting the spawn of Satan to learning how to kill an attacking dog to plotting recurring revenge upon a pervy McDonald’s manager” as she “acquired a non-traditional skill set as an adolescent and beyond:” How I Became an Unskilled Laborer

9:30 pm ($5): A monthly stand-up competition at UCB East in which “new and emerging stand-up comics face off against each other in front of a panel of judges eager to provide unsolicited advice and even more unsolicited scores”—the judges being Brian Cichocki (Caroline’s, Stand-Up New York), and Shannon Coffey. If you’re an up-and-coming stand-up, send a video link and brief bio to john@ucbcomedy.com for a chance to participate in Stand-Up Smackdown

[TOP PICK] [FREE] 11:00 pm: Some of the finest comics in the world—who haven’t yet been announced, but you can check for an update here—performing at UCB Chelsea and hosted by comedy genius Chris Gethard (star of The Chris Gethard Show; author of new bestseller A Bad Idea I’m About to Do): Whiplash

[FREE] 11:00 pm: If you’re an audience member who loves stand-up, Monday at 11 should beWhiplash! night (see listing above). If you’re a comic who couldn’t get booked on UCBT’s all-star show, though, you can opt to instead practice your skills at this exceptionally supportive stand-up open-mic at The PIT upstairs theatre hosted by the Thelma & Louise of comedy, Michelle Wolf & Erin Lennox: Fresh