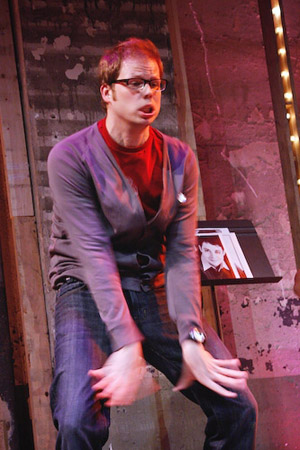 [TOP PICK] 7:00 pm ($5): One of my favorite writer/actress/improvisors, the brilliant and luminous Lauren Olson, teams with Jon Bander and Karsten Cross at The PIT upstairs theatre to perform at improv trio Mr. Gorsky

7:00 pm ($7): Improv at The Magnet revolving around “the anticipation, the fall-out, that fragile moment when love blooms or dies:” Double Date

[TOP PICK] 7:30 pm ($10): Stone Cold Fox is the only sketch troupe (vs. improv troupe) to ever be honored with an ongoing spot on the prestigious UCB Chelsea weekend schedule. It’s earned this slot because its cast is one of the finest in comedy, with each performer strong enough for potential stardom; and, at their best, the troupe’s writers sizzle too. Both strengths are evident in Crisistown, an interactive sketch show in which the audience is periodically asked to choose which of two paths it wants to go down next. This highly playful approach puts you in charge; and it also tempts you to see the show repeatedly (just as you might return to a favorite improv group week after week), because each performance is a never-to-be-repeated event. A vibrant, brilliant cast and mostly terrific comedy writing—plus what was probably a near-superhuman directorial effort by comedy giant Shannon O’Neil—equals a wonderful way to kick off your Friday evening: Stone Cold Fox: Crisistown

[TOP PICK] [$] 8:30 pm ($15): A musical comedy at The Magnet “inspired by the real life plans of the US military to build a bomb that would make their enemies gay. The show is a cautionary tale set in a not-to-distant America that is a xenophobic, homophobic wet dream. This timely political piece is not only topical but extremely on point, leaving no stereotype unscathed.” Directed by Michael Martin, with music by Frank Spitznagel, and book and lyrics by Chris Friden & Steve Whyte: Gay Bomb

[$] 8:30 pm & 10:30 pm ($25 & 2-drink min.): Vic Henley is one of the most likeable stand-ups in the biz. He’s co-headlining tonight and Saturday with Kevin Flynn—who I’ve never seen, but is probably terrific too—at the Gotham Comedy Club: Vic Henley & Kevin Flynn

[TOP PICK] 9:00 pm ($10): Some of the finest improv in NYC from UCB Chelsea’s all-star members of The Stepfathers

9:30 pm ($10): A PIT improv troupe making up a musical on the spot after a friendly greeting: Hello

Midnight ($5): A screening of a 2010 feature film by the Upright Citizens Brigade written, co-directed, and co-starring Matt Besser, and also briefly featuring Amy Poehler, Matt Walsh, and Ian Roberts (Ian almost steals the movie by simply delivering a doctor’s diagnosis…) at UCB East—which is a perfect venue for films because it used to be an indie movie theatre: Freak Dance

P.S. If you can’t make this screening, you can alternatively pay to see the movie for a brief time online via various streaming film sites and/or buy its soundtrack to enjoy anytime via iTunes.

[FREE] Midnight: This show might not be much fun for audience members, but it’s an amazing opportunity if you want to try out sketches for free and with almost zero hurdles on the prestigious UCB Chelsea stage. Hosted by Maude troupe Onassis: Liquid Courage