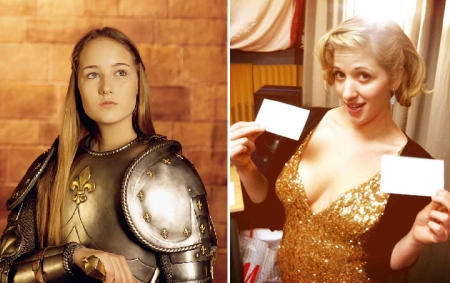 Joan of Arc was burned at the stake on May 30, 1431. Come honor her memory through comedy (Joan loved to laugh) tonight along with brilliant & luminous host Elna Baker (above, in Joan’s favorite party dress)… 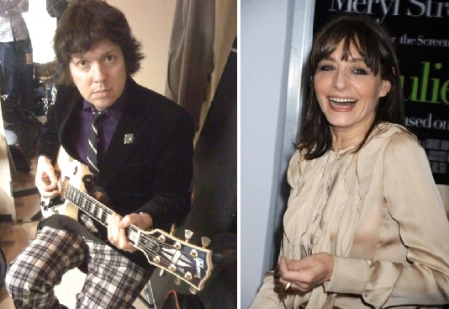 [MEGA-TOP PICK] 8:00 pm ($5): A spectacular and unforgettable demonstration of the artful power of mime when combined with a wickedly sharp modern sensibility, executed with great wit and style. Street performers have given mime a bad rep; but if you think about it, what mime does is boil a situation down to its essential elements, and then express those elements in a manner that’s instantly and universally understood. That’s really what art is all about; and that’s also what Billy the Mime does, often brilliantly. (For my review of his FringeNYC show in 2006, please click here.): Billy the Mime

[TOP PICK] 9:30 pm ($5): One of the finest comedic storytelling shows in the country, in which brilliant writer/performers —who tonight are Dan St. Germain, Halle Kiefer, Christian Capozzoli, Jon Gabrus, and host Dave Martin—tell tales that are brutally honest and utterly hilarious at UCB Chelsea, with tonight’s theme Vices: The Nights of Our Lives

[TOP PICK] [FREE] 11:00 pm: The wonderful Sasheer Zamata (Doppelganger) hosts as many as a dozen guests packed into 75 minutes performing stand-up, improv, sketch, and occasionally acts that defy categorization. The level of talent can vary wildly, but for some (like me), that’s part of the laid-back fun; and this is often one of the most amazing comedy shows in town. (Tonight’s scheduled lineup includes UCBT Artistic Director Nate Dern, Julia Weideman & Boris Khaykin, Pat Baer & Friends, Veronica Osorio, and Adam Conover; for the complete list, please click here.) Come support the experimentation, and periodic magical surprises, that this uniquely organic rollercoaster of a weekly show at UCB Chelsea makes possible—and don’t forget to toss $1 in the bucket on your way out: School Night

11:00 pm ($5): Sketch, improv, and audience participation in this new show directed by Steve Soroka (BoF) at The PIT downstairs lounge: Night Out with The Pin-Up Squirrels