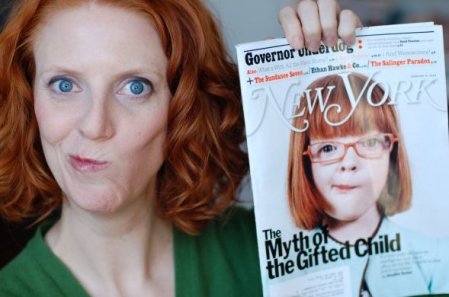 The lovely Julia Wiedeman is both playful… 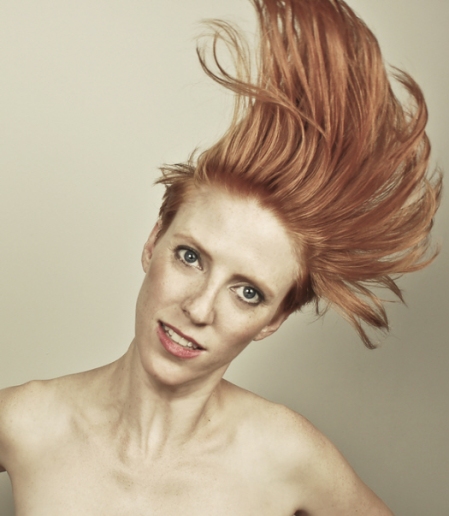 …and fearless in her memorable sketch show Naked People

6:00 pm ($5): Two shows about which I know nothing audition for a regular spot on the prestigious UCB Chelsea schedule: Kathy and Emily Regret Everything and Small Men. These might be great or awful; but at $2.50 per show, you can’t go far wrong either way. That’s part of the fun of Spank

[TOP PICK] 8:00 pm ($5): At UCB Chelsea, a witty and ultimately exhilarating exploration of baring it all by fabulous long-time nudist Julia Wiedeman. Julie is a charismatic actress whose star is just starting to rise, and is well worth catching even beyond the enjoyment of her playful beauty. Check out promo videos here and here, and then run to see Naked People…

…and in the other half of this double-bill, a one-man sketch show by George Kareman about which I know nothing, but it has a fun title: Incredibly Extreme and Extremely Incredible

8:00 pm ($5): Sketch comedy from a group that met as college students in Boston now performing at The PIT upstairs theatre: Astronaut Theatre

8:00 pm-MIdnight ($7 for the entire evening): The Magnet house troupes The Boss, Hello Laser, Phooka, and Junior Varsity performing improv, followed at 10:00 pm by Christina Gausas directing The Subject (improvised scenes that focus on one character who never leaves the stage, while other characters from the past, present, and future come and go), and then at 11:00 improv competition Inspirado (like UCBT’s Cage Match, but with a game-like challenge component) with troupes Upstate and Pumpkin battling for laughs & votes: The Magnet’s Night Out

[TOP PICK] [FREE] 9:00ish pm: Terrific NYC stand-ups (the lineup is typically announced by 3:00 pm; for an update, please click here) performing on this weekly show at the Kabin Bar and Lounge hosted by Chesley Calloway and comedy genius Sean Patton: Comedy as a Second Language

[MEGA-TOP PICK] 9:30 pm ($5): Todd Bieber, the razor-sharp Director of Content & Production for UCBComedy.com, has had his video/film work viewed over 25 million times via such sites as YouTube.com, NewYorkTimes.com, and EntertainmentWeekly.com. But before his success, Todd spent a couple of years churning out, as he bluntly puts it, “shitty local commercials in rural Pennsylvania.” If you’re a filmmaker, a fan of ridiculously awful late-night TV ads, or someone who likes to laugh, come enjoy this fascinating and hilarious insider look at microbudget commercials and the creative process (for a trailer, please click here). Directed by UCBT Artistic Director Nate Dern, this is one of the very best solo shows in NYC: Commercial Interruption…

…plus in the other half of this double-bill, “Matt Hobby & Mary Grill have a love deeper than one thousand really deep oceans. Through storytelling and sketch comedy, Matt & Mary show you the characters who helped them on their journey from fiancés to newlyweds:” Tying the Knot

9:30 pm ($5): Improvisors (not announced) make up one-act plays on the spot at The PIT downstairs lounge for The Scene

9:30 pm ($5): Sketch comedy written by Ryan Darden & Melissa Somosky that purports “love is like eating an entire cake all by yourself—it’ll make you sick, but deep down you secretly like it” at The PIT upstairs theatre: Fetish: Dirty Talk is for Amateurs

[FREE] 9:30 pm: A monthly showcase of both stand-ups and improvisors at The Creek upstairs theatre in Queens’ Long Island City, hosted by stand-up Zach Broussard and improv troupe Priest & the Beekeeper: Pig Pile

[TOP PICK] 11:00 pm ($5): Airwolf is crushing all opposition, winning its eight victory in a row last week 116-49. Tonight Airwolf will be seeking to stamp out The Pox. Don’t miss this medicinal competition for audience laughs and votes at UCB Chelsea for the raucous Cage Match