For more, please visit HyReviews.com.
For a sampling of classics, please click here. 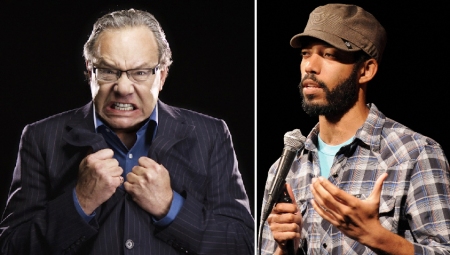 Lewis Black, Wyatt Cenac, Gilbert Gottfried, Kevin Allison, Keith and the Girl, and more are live on stage for an event running today from 3:00 pm through midnight at Fontana’s: NYC Podcast Festival

[TOP PICK] 6:00 pm ($6.17 online or $5 at the door; show up early to nab seats): A live taping of podcast Keith and the Girl, with guests Danny Hatch, Myka Fox, Lauren Hennessy, and Emmy Pellot at Fontana’s (105 Eldridge Street): Keith and the Girl Live Podcast

[MEGA-TOP PICK] [$] [DISCOUNTED] 7:00 pm & 9:30 pm ($25 with discount code SHAKES FB at the door; please note the entire run has SOLD OUT, but the theatre can often squeeze people in if you’re okay with standing): Genius improvisors from Chicago delivering one of the funniest shows you’ll ever see by making up a play on the spot using the language and themes of the Bard. This is the finest improv troupe in the world, and one of the best comedy shows of any kind, anywhere. Tonight is the third of a four-night NYC run at at Theatre 80 St. Marks (80 St. Marks Place, off First Avenue), with every evening utterly different from the last. This is a rare opportunity to enjoy the breathtakingly skilled Improvised Shakespeare Company

[TOP PICK] [$] [DISCOUNTED] 7:00 pm & 9:00 pm & 11:00 pm (FREE TICKETS if you reserve in advance by calling (212) 260-2445 and mention HyReviews.com, but there’s still a 2-drink min. per person): Judah Friedlander (one of the quickest minds in comedy; 30 Rock, Meet the Parents, Along Came Polly, author of How to Beat Up Anybody), Dave Smith (IFC’s Z-Rock), DC Benny (Last Comic Standing, Comedy Central, ABC’s The Unusuals), and more performing stand-up at the only comedy club in the East Village: Eastville Comedy Club

[TOP PICK] 7:00 pm ($8): Improv troupe Punctual Drunks interviews an audience member about his or her favorite fairy tale, and then picks up the story where it left off so you can find out how it really ended, at The PIT downstairs lounge: Punctual Drunks & Friends

9:30 pm ($10): Improvisors make up new episodes of a TV classic at The PIT downstairs lounge: Saved by the Bell: The Lost Episodes