Jen Jamula is relentlessly hilarious reenacting fan fiction in which Severus Snape teaches the Teletubbies about sex. See this and much, much more in the conclusion of a spectacular (and mostly sold out) run at The PIT: Best of Blogologues… 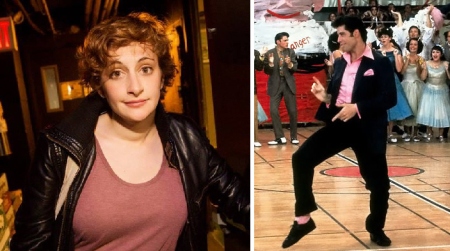 [TOP PICK] 7:30 pm ($10): Improv powerhouses Charlie Todd, Jim Santangeli, Natasha Rothwell, Brandon Gardner, Chelsea Clarke, and more at UCB Chelsea interview an audience member about where he or she grew up and then “turn that town’s tourist attractions, landmarks, hangouts, local celebrities, urban legends, and more into a hilarious show made up on the spot:” The Curfew: Not From Around Here

[TOP PICK] [$] [DISCOUNTED] 8:00 pm ($24.75 via Goldstar [vs. $29 at the door]): The only FringeNYC show to ever include a barbershop quartet singing about alcohol and three rounds for each audience member (for my full review, which includes a rave for the spectacular Nicole DiMattei, please click here) is now playing as a perfect show for a date every Thursday, Friday, and Saturday night at the West Village’s Soho Playhouse (15 Vandam Street, in the downstairs Huron Club): The Imbible: A Spirited History of Drinking

8:00 pm ($8): “A not-so-safe space where comics expose the shitty, horrifying teenager that made them into shitty, horrifying adults. Nobody leaves until everybody cries” at Brooklyn’s The Annoyance Theatre (367 Bedford Avenue; take J/M/Z to Marcy Avenue or L to Lorimer Street): The Roast of Your 15-Year-Old Self

[FREE] 8:30 pm: This show-and-tell event encourages you to “bring your weird family photos, demonstrate how many flips you can do in a row, reveal the tattoo your uncle gave you at last year’s family retreat—share anything crazy, kooky, strange or insane; the best of the best will win prizes and bragging rights,” plus stand-up from Jeff Simmermon, Graham VanBach, J.P. McDade, and more, all performing at Brooklyn’s Over the Eight (594 Union Ave) produced by Lukas Kaiser and hosted by Alison Leiby (Comedy Central): Show/Tell Show

9:00 pm ($10 at the door or $11.59 online): On this unique show, as stand-ups do their sets they’re drawn on the spot by animators. Tonight’s comics are Alex Koll, Jacqueline Novak, Greg Johnson, Max Silvestri, Ramon Rivas, and Kate Willett performing at Brooklyn’s Union Hall produced by Sam Varela & Brandie Posey and hosted by Peggy O’Leary: Picture This!

[MEGA-TOP PICK] [$] 9:30 pm ($20 at the door or $22.09 in advance online—the latter is highly recommended because this show will almost certainly sell out): Tonight’s your last chance to enjoy this run of a top-notch theatrical troupe that’s equally fine at compelling acting and split-second comedy uses actual material on the Web, performed verbatim, to craft laugh-out-loud scenes. Any Blogologues performance is worth catching, but this compilation of its very best sketches after 15 themed shows, and starring its top comics Allison Goldberg, Jen Jamula, and Wendy Joy Cooley, is a must-see. Included are such unforgettable bits as “Dolphin Sex” and “Severus Snape Gets It On with Teletubbies.” Don’t miss this final performance at The PIT upstairs theatre: Best of Blogologues

[FREE] 10:00 pm: NYC stand-ups at this monthly show that describes itself as follows: “Starting in 1982, the city of Atlanta threw an annual party called Freaknik which essentially became the largest black spring break party in the country. The party became so big and wild that the city shut it down for good in 1996. But comedians Andy Sandford and Noah Gardenswartz are bringing Freaknik back…to Long Island City. ‘Comedy Freaknik’ will be a lot like the original Freaknik, except it’s going to happen once a month, and it will be a comedy show hosted by three white guys. That’s basically the only difference” at The Creek upstairs theatre in Queens’ Long Island City: Freaknik

[TOP PICK] 11:00 pm ($10): With the help of social media, writers & performers—who tonight include spectacular rising star Dana Krashin—put together an entire sketch show from scratch in one intense day and then perform it atThe PIT upstairs theatre: Sktch Shw

11:00 pm ($10): Disturbing and semi-obscene sketches at The PIT downstairs lounge from troupe FUCT

11:30 ($5): “Matt Radlow & Betsy Kenney are not musicians, and neither are their friends. But that won’t keep them from delivering one hour of non-stop music-themed comedy directly to your brains” at the UCB East theatre: Matt and Betsy Do Music

[FREE] 4:00 pm: An unusually early weekly open mic stand-up show (“starts late enough to sleep off that hangover but ends just in time to begin a new one”), with sign-up at 3:30 pm, at The Creek upstairs theatre in Queens’ Long Island City hosted by Raj Sivaraman & Sam Evans host: The Amateur Hour

[FREE] 6:00 pm: Veteran improvisors make up scenes with improv students from any school (selected by lottery) at Brooklyn’s The Annoyance Theatre (367 Bedford Avenue; take J/M/Z to Marcy Avenue or L to Lorimer Street):Fishbowl