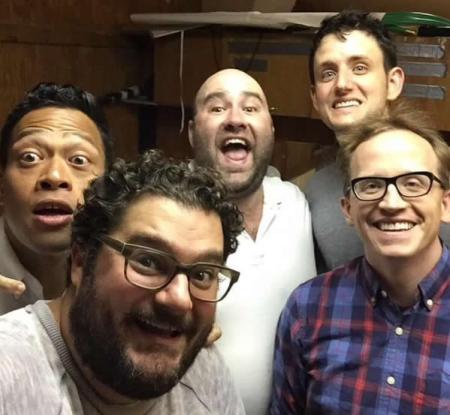 …so if you haven’t yet seen this shot-by-shot stage homage to Jurassic Park, tonight’s a great time to Hold On To Your Butts

[TOP PICK] [FREE] 7:00 pm: Storyteller Abigoliah Schamaun (Moth StorySlam winner) performs a one-woman show in which she “reflects on her own amorous affairs, then asks ‘What’s the weirdest thing you’ve been told post-coitus?’ Sometimes it’s bizarre, other times it makes you fall in love. But it’s always interesting and often a bit wrong. Example: ‘Man. I thought sleeping with you would help me get over Diana. But I feel horrible.’ Just one of the things said to Abigoliah after sex…” at The Creek upstairs theatre in Queens’ Long Island City: Abigoliah Schamaun: Post-Coital Confessions

[TOP PICK] [$] [DISCOUNTED] 8:00 pm ($24.75 via Goldstar [vs. $29 at the door]): The only FringeNYC show to ever include a barbershop quartet singing about alcohol and three rounds for each audience member (for my full review, which includes a rave for the spectacular Nicole DiMattei, please click here) is now playing as a perfect show for a date every Friday & Saturday night at the West Village’s Soho Playhouse (15 Vandam Street, in the downstairs Huron Club): The Imbible: A Spirited History of Drinking

[TOP PICK] [$] 8:30 pm ($12): Sasheer Zamata (instant star cast member of Saturday Night Live) and Danny Tamberelli (The Adventures of Pete & Pete) are the guests of “Eliot Glazer, a classically trained vocalist-turned-comedian, who takes some of pop music’s most infamous songs and turns them into highbrow, sweeping ballads. Like a twisted version of MTV Unplugged, Austin City Limits, or VH1 Storytellers, it’s an intimate night of bad music made good” at Brooklyn’s The Bell House (149 7th Street): Haunting Renditions

[TOP PICK] [$] 9:30 pm ($20 at the door or $22.09 online; the latter is recommended as this show frequently sells out): Kyle Schaefer, Nick Abeel, and foley artist Kelsey Didion perform a spectacular live shot-for-shot stage version of Jurassic Park at The PIT upstairs theatre directed by Kristin McCarthy Parker: Hold On To Your Butts…Jurassik Parc

10:15 pm ($7): Improv is dominated by guys, so this is a rare treat—a dozen female improvisors “for an evening of comedy that will delight men, women, babies, and kittens,” hosted by Megan Gray at The Magnet theatre: We Might Just Kiss

[FREE] 11:00 pm: Vancouver improv group The Sunday Service “favors discovery over structure, building, demolishing, and building again an absurd patchwork of scenes and stories. Using strong narratives and character work as grounding, the group dips in and out of meta-comedy, rock opera, wordplay, and even slapstick shtick” (see also 8:30 pm); plus PIT house improv group The Studio System, all for free at The PIT upstairs theatre: The Sunday Service and The Studio System