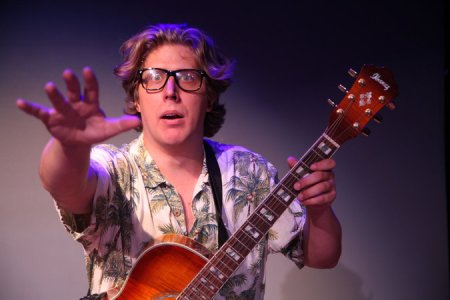 This one-man show which recently received a rave review from The New York Times stars charismatic and hilarious rising star David Carl, who transforms into Gary Busey—and portrays child-like Busey doing a one-man version of the psychologically complex masterpiece Hamlet. The result is consistently inventive, joyful, and laugh-out-loud funny. This was my second favorite show—out of 196—at the 2014 FringeNYC, went on to further acclaim at the Edinburgh Fringe Festival, and is one of the funniest shows in New York, period. If you haven’t seen GBOMH, don’t miss this wonderful opportunity to do so. And if you have, share it with a loved one who’s been deprived of GBONH: Gary Busey’s One-Man Hamlet (As Performed by David Carl) (10:30 pm, $20, The PIT Loft at 154 West 29th Street)

[TOP PICK] [$] 6:00 pm ($10 cover plus $10 drink min.; reservations highly recommended by calling 212.989.9319): Four funny people tell amazing stories. Three of the tales are absolutely true…but one of them is a pack of lies. The audience then asks questions to try and identify the fibber—and everyone who chooses correctly gets a free t-shirt! This evening’s yarn-spinners are Cammi Climaco (host of Ask Me Stories), Tim Manley (author of Fairytales For Twenty-Somethings), Jeff Scherer (Chicago City Limits), and Danusia Trevino (Moth GrandSlam Champion). Come to the West Village’s Cornelia Street Cafe (29 Cornelia Street) and let these talented storytellers and guest host Peter Aguero (Conan O’Brien, Moth GrandSlam Champion, WNYC’s Moth Radio Hour, The BTK Band) attempt to mislead you at The Liar Show

[FREE] 6:00 pm: Ben Conrad, Lizzy Mazzucchelli, Will Carey, and Will Watkins each perform a different 10-minute stand-up every Saturday in March at The Creek’s upstairs theatre in Queens’ LIC (10-93 Jackson Avenue) hosted by Grant Lindahl: The 8

7:00 pm ($5): A comedic play from duo Nancy McCabe-Kelly & Bruce Jarchow about “a baby boomer couple taking a road trip to Wisconsin for a destination wedding. Along the way they examine their lives, past, present, and future with the local radio, landscape, and nostalgia of Wisconsin as the backdrop” at The PIT upstairs theatre (123 East 24th Street): Been There, Still There

[TOP PICK] 7:30 pm ($10): “Created in 1995 at the iO Theater in Chicago, The Armando Diaz Experience is the longest running improv show ever. A guest monologist—who tonight is Alexis Lambright—takes a suggestion from the audience and shares true personal tales. These stories are then brought to life by a rotating cast of improv all-stars—and occasionally Armando himself” at The Magnet theatre: The Armando Diaz Experience

[TOP PICK] 8:00 pm ($10):A comedic play about the US government in 1991 forming a secret agency charged with monitoring and eliminating online internet threats, the Headquarters for Authorizing Computerized Knowledge, at Brooklyn’s The Annoyance Theatre (367 Bedford Avenue; take J/M/Z to Marcy Avenue or L to Lorimer Street): USA_HACK

[TOP PICK] [FREE] 9:00 pm: In this acclaimed monthly show, NYC stand-ups “risk getting slapped by Satan himself. Actually, he hosts only bringer shows, but join Matt Wayne and Doug Smith as they step into the Big Man’s shoes and put NYC’s finest through comedy purgatory. Hula-hoops, celebrity impressions, unwanted audience participation, all incorporated into each performance! Will they triumph or will the nether world eat their souls? Come see for yourself in this monthly showcase” at Queens LIC’s The Creek upstairs theatre hosted by Matt Wayne & Doug Smith: See You in Hell

[$] 9:30 pm ($20): This Harry Potter parody is crippled by a mediocre script, but is spared from being an utter waste of time by inventive direction from the highly talented Kristin McCarthy Parker (Hold On To Your Butts), and a large and mostly likeable cast (including the wonderful Langston Belton…who doesn’t get to do nearly enough) at The PIT upstairs theatre: Puffs, or Seven Increasingly Eventful Years at a Certain School of Magic & Magic

[TOP PICK] 10:30 pm ($10): Long form improv about the behavior of a theatrical troupe both on-stage and off-stage, revolving around a different show biz theme each week—which tonight is Greek Tragedy—at The Magnet theatre: The Cast: Greek Tragedy Edition

[TOP PICK] 10:30 pm ($10): Using real horror films purchased in local gas stations and bodegas, the hosts select specific clips to play for 30 seconds, pause, and then ask the improvisers to finish the scene. Will anyone survive at The PIT downstairs lounge? Attend at your own peril with hosts J. W. Crump: Gas Station Horror

[FREE] 3:00-5:00 pm: “After a nice brunch with your best and brightest gal pals, come on over to QED for some jokes.” This all-gal stand-up open mic, which will aim to give everyone stage time, is at Astoria Queens’ QED: A Place to Show & Tell (27-16 23rd Avenue) hosted by Lauren Hope Krass & Andrea Ilene Shapiro: Ladies’ Open Mic

[FREE] 10:30 pm: If you’re female, this is your chance to get on stage for an improv jam hosted by all-gal group Gun Club at Brooklyn’s The Annoyance Theatre (367 Bedford Avenue; take J/M/Z to Marcy Avenue or L to Lorimer Street) followed by a dance party: Twat the Night: Gal Improv Jam