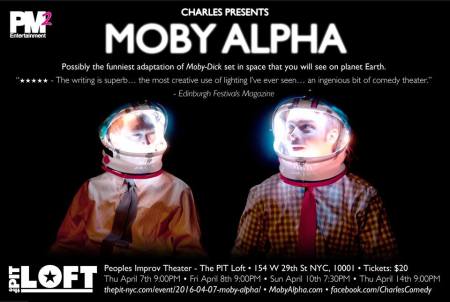 A version of Moby Dick in space, with an extra twist: “the show is performed in an entirely dark theater, with the only light emanating from the duo’s custom-built million-color LED space helmets, creating a unique otherworldly aesthetic:” Moby Alpha (9:00 pm, $20, The PIT Loft at 154 West 29th Street)

[TOP PICK] 8:00 pm ($5): A sketch show about disabilities, and the art of theatre, at the UCB Chelsea theatre: Bent But Not Broken…

…and in the second half of this double-bill, a soap-operish play with a large cast: Ocean’s Lake

[TOP PICK] 8:00 pm ($5): The greatest science fiction anthology radio show of all time was X Minus One. Improvisors who know their genre history created this show in which they make up scenes of awe, mystery, and wonder at The PIT upstairs theatre—with an opening act from Greg Triggs (Broadway’s Next Hit Musical) improvising 1940’s-style tunes based on your suggestions: X Plus One

[TOP PICK] 8:00 pm-Midnight ($10 for the entire evening): Four veteran house improv groups, themed improv show Object Work (“the inanimate comes alive before your very eyes and the laws of the natural world are twisted, bent, and finally broken”), and improv competition Inspirado, all for just $10 at The Magnet theatre: The Magnet’s Thursday Night Out

[FREE] 8:00 pm: “A new game show where three contestants get quizzed on random topics; raps, video games, different types of soda. We’ll even have a few comics drop by” at The Creek upstairs theatre in Queens’ LIC (10-93 Jackson Avenue) hosted by Marvin Lattimore: A Night of Thrill-Vila

[TOP PICK] 9:00 pm ($10): A comedic play written and starring Ian Lockwood & Sophie Zucker, and directed by Philip Markle, in which “Baby Jessica was the first child to fall down a well, thereby capturing the nation’s attention and becoming America’s sweetheart overnight. Baby Ian will be the second” at Brooklyn’s The Annoyance Theatre (367 Bedford Avenue; take J/M/Z to Marcy Avenue or L to Lorimer Street): Baby Ian Falls Down a Well

[MEGA-TOP PICK] 11:00 pm ($5): Two of the finest Improv groups in the country, Fuck That Shit and Airwolf, compete for your laughs and votes at UCB Chelsea for tonight’s especially awesome Cage Match

[FREE] 8:00 pm: Walk-in open mic (with names selected from a bucket) to do anything you want for 5 minutes—”chat, rant, plug, tell a story, be a character, play a game, review a new religion”—for a podcast recorded at The Creek downstairs lounge in Queens’ LIC (10-93 Jackson Avenue) hosted by Mike Guild & Mike Mercadal: The Open Mic Podcast