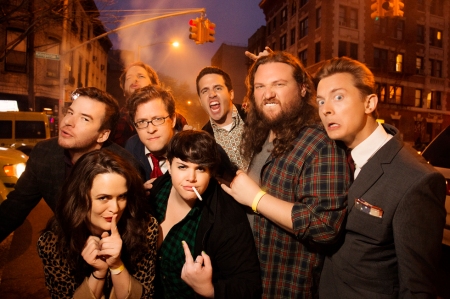 [FREE; reserve tickets here] 1:00 pm: A rare lunchtime stand-up show for families, with all kids under 15 allowed on stage to tell a joke, at The Creek upstairs theatre in Queens’ LIC (10-93 Jackson Avenue) hosted by Peggy O’Leary & Lindsay Boling: Guess What?

10:00 pm ($5): Four pairs of stand-ups try to entertain you with their unrehearsed banter at The Creek upstairs theatre in Queens’ LIC (10-93 Jackson Avenue) hosted by Scotland Green & Alison Zeidma (who will interrupt whenever they feel there’s a lull with a random new topic for discussion): Banter Show

10:30 pm ($5): “We’re here to listen to things you’re sad, angry, frustrated, or just feeling strongly about. We will listen to audience members share their emotions and help them deal with it in whatever way they choose—including but not limited to dancing, singing, screaming, hugging, eating, breaking shit, whatever you need. We’ve got a list of approved methods for dealing with strongly held emotions; you choose which method speaks to you and the whole crowd supports you. You’re not alone. You are heard!” at Brooklyn’s The Annoyance Theatre (367 Bedford Avenue; take J/M/Z to Marcy Avenue or L to Lorimer Street): You Are Heard

[FREE] 6:00 pm: Put your name in a bucket for this open mic for stand-up, sketch, music, or anything else you want to work out on stage at Brooklyn’s The Annoyance Theatre (367 Bedford Avenue; take J/M/Z to Marcy Avenue or L to Lorimer Street) hosted by Josh Bates & Brian Pisano: Make Out Party: An Open Mic