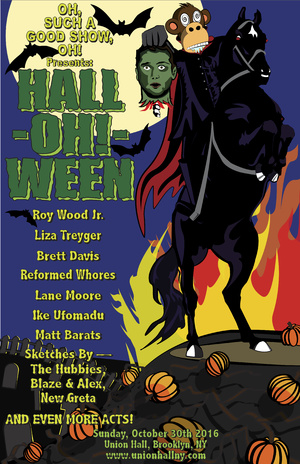 …and Hall-Oh!-Ween at Brooklyn’s Union Hall

4:00 pm ($10): Peter Michael Marino improvises a soul-baring one-man show inspired by interactions with the audience (and with the help of stellar director Michole Biancosino) at The PIT Loft (154 West 29th Street): Show Up

7:30 pm ($7): “Who knew that the nerd you were casual acquaintances with in high school was secretly a famous elf warrior? Or that the quiet girl in math class was a 1,000-year-old witch? In fact, all those weirdoes you never talked to were secretly battling the forces of darkness in their mother’s basement. This show flips back and forth between fantasy and reality, magic spells and homework anxiety, the bravest campaign against evil ever fought and the hopes and dreams of the kids who imagine it all” at The Magnet theatre: Dragons & Dungeons

8:30 pm ($5): Improvisors give up specific bad habits for seven days, with half of this week’s comics giving up sugar while the other half stay up for 36 hours straight, at Brooklyn’s The Annoyance Theatre (367 Bedford Avenue; take J/M/Z to Marcy Avenue or L to Lorimer Street): Bad Habits: Sugar and Sleep

8:30 pm ($5): A variety of comics (not announced) performing at The PIT upstairs theatre hosted by Will Cheng: Wildcard Comedy Hour

[FREE] 10:00 pm: An open-mic stand-up show (sign up is at 9:45 pm) providing 5 minutes for each comic whose name is pulled from the bucket at The Creek downstairs lounge in Queens’ LIC (10-93 Jackson Avenue) hosted by Ian Kitchen: The Grandstand

9:30 pm ($3): Open-mic comedy, with 3-5 minutes per walk-in performer who signs up (first come, first serve) at The PIT downstairs lounge, hosted by Will Neville: Amateur Night at the Gemini