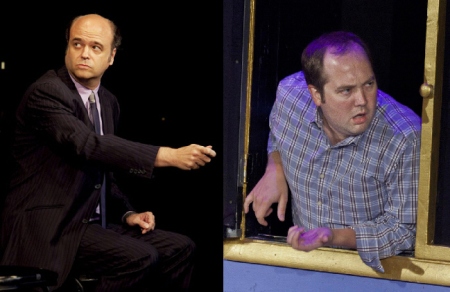 Scott Adsit (cast member of 30 Rock, and co-writer/director/producer & cast member of Adult Swim’s awesome & Emmy-winning Moral Orel) teams up with fellow 30 Rock actor John Lutz (who previously spent six years as a staff writer for Saturday Night Live, and currently writes & performs for Seth Meyers) to form a breathtakingly super-smart, artful, and hilarious star duo that’s become one of the finest teams in the history of improv. This show—which should cost around $30, but is a mere $5—should not be missed: John & Scott (9:30 pm, $5; sold out of seats, but you can probably get in if you’re okay with standing; UCB Chelsea at 307 West 26th Street)

7:00 pm ($5): A one-woman show by Valerie David about her bouts with lymphoma and breast cancer at The PIT Loft (154 West 29th Street): The Pink Hulk: One Woman’s Journey to Find the Superhero Within

[TOP PICK] 7:30 pm ($5): Kirsten O’Brien & Evan Zelnick screen and comment on clips from terrible films with actors early in their careers who later became stars—and now wish these dreadful artifacts of their rise to fame didn’t exist, including 1991’s Cool as Ice, 2008’s The Happening, and 2011’s Love, Wedding, Marriage, at The PIT downstairs lounge: Straight to DVD

9:30 pm ($5): Willy Appelman co-wrote & performs in this show about diverse oddballs who come together to celebrate a wedding at Brooklyn’s The Annoyance Theatre (367 Bedford Avenue; take J/M/Z to Marcy Avenue or L to Lorimer Street): Characters From a Wedding

[TOP PICK] 10:15 pm ($5): The UCB Touring Company consists of some of UCB’s finest improvisors who show audiences beyond those visiting UCB’s theatres in NYC and LA what improv is all about. For this monthly show, however, the traveling troupe will be strutting its stuff on the UCB East stage: UCB TourCo

[TOP PICK] 10:30 pm ($5): Mike Cabellon, Adrien Pellerin, Katie Sicking have written and star in this musical about “three Millennial janitors who band together to launch a promising enterprise that breaks every promise from boom to bust; it’s never about the product, it’s an excuse to give a TED Talk” at The PIT Loft (154 West 29th Street): Meet the CEOs: A Start-Up Musical

11:00 pm ($5): Frankie Grande (actor/dancer/singer who’s been a cast member of Mama Mia and Rock of Ages on Broadway, and CBS’ Big Brother) has an talk show built around him and his friends for one night only at the UCB Chelsea theatre: Night Late