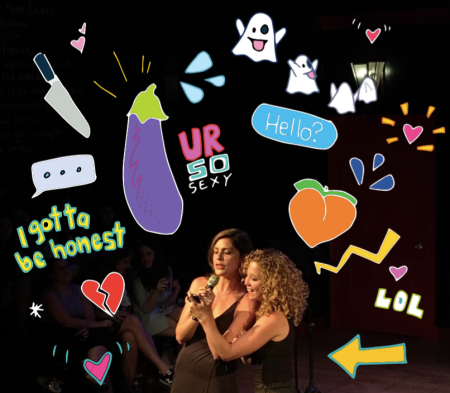 Over 17 hours of improvisation at The PIT Mainstage, Underground, and Loft—including phenom improv duo Rebecca Vigil & Evan Kaufman making up a full-blown musical about an audience couple’s relationship in Your Love, Our Musical at 7:00 pm, dynamite comedy duo Jen Jamula & Allison Goldberg (above) analyzing audience relationships-via-messaging in How to Break Up by Text at 8:00 pm, a fierce improv competion fueled by short-form games crafted by comedy treasure Tracy Mull in The Island at 9:00 pm, and a show that might involve verbal abuse, violence, and anything else you might experience eating with relatives in Awkward Family Dinner at 11:00 pm—on this 3rd day of a 5-day festival featuring over 150 improv shows: The Sixth Annual NYC Improv Festival (6:00 pm-12:30 am; $10 per show, or $30 for an all-you-can-see festival pass; The PIT Mainstage & Underground at 123 East 24th Street and The PIT Loft at 154 West 29th Street)

[TOP PICK] [$] 7:30 pm & 10:00 pm ($35 & 2-drink min.): The star of former Comedy Central sex series Not Safe, co-host of former MTV interview series The Nikki and Sara Show, and co-host of podcast You Had to Be There, and a stand-up who’s performed on Conan O’Brien, Jay Leno, Last Comic Sanding, and her own Comedy Central Half Hour headlines tonight through Sunday at the Carolines Comedy Club: Nikki Glaser

Midnight ($5): A mix of stand-up, sketch, music, and/or improv at Brooklyn’s The Annoyance Theatre (367 Bedford Avenue; take J/M/Z to Marcy Avenue or L to Lorimer Street) hosted by Carmen Christopher: The Juice

This entry was posted on Friday, March 24th, 2017 at 3:15 am and is filed under Best New York Live Comedy Shows. You can follow any responses to this entry through the RSS 2.0 feed. You can leave a response, or trackback from your own site.