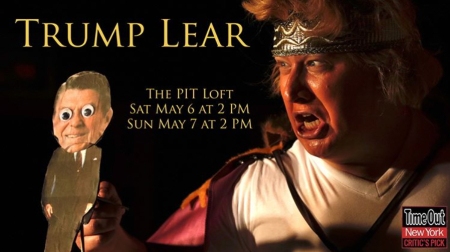 David Carl (hilarious, charismatic rising star; Point Break Live) has a new one-man show, this time “about a fictional solo performer named Carl David who receives critical acclaim playing President Trump doing King Lear by himself. President Trump hears about Carl’s parody and requests Mr. David’s presence.” Considering a series of bizarre events eventually led David to change the title of his award-winning one-man show Gary Busey’s One Man Hamlet (As Performed by David Carl) to David Carl’s Celebrity One-Man Hamlet, this show just might be inspired by actual events (albeit that have nothing to do with Trump…). Come judge for yourself at Trump Lear (2:00 pm, $20, The PIT Loft at 154 West 29th Street)

[$] 2:00 pm ($20): This musical with puppets is a family-friendly and interactive reinvention of the fairy tale The Three Billy Goats that urges the audience to work at improving the environment. Today’s performance at The PIT Mainstage is the NYC premiere of Gruff!

[$] 5:00 pm ($15): Peter Michael Marino improvises a soul-baring one-man show inspired by interactions with the audience (and with the help of stellar director Michole Biancosino) at The PIT Loft (154 West 29th Street): Show Up

[$] 7:00 pm ($15): In this musical written & directed by Elias Rubin, the 3rd graders of TV series The Magic Schoolbus have grown up and are enjoying their last day of high school…when their former teacher Ms. Frizzle abruptly reappears to take them on an out-of-this-world adventure at The PIT Mainstage: The Edge of the Universe: A Magic School Bus Musical Parody

7:30 pm ($7): Improv from two groups at The Magnet theatre: Lack Lobster and Gyre

[MEGA-TOP PICK] [$] [DISCOUNTED] 8:30 pm ($14.80 online using discount code BOX!2, otherwise $18): My favorite FringeNYC 2016 show (out of over 60 seen) was a production taking place entirely inside a box, written & performed by breathtakingly talented sketch comic/actress/writer/singer Dominique Salerno (for my review, please click here). This amazing production is now enjoying a revival running Sundays at 8:30 pm at The PIT Mainstage through June 11th. Take advantage of this wonderful chance to experience The Box Show

[TOP PICK] 8:30 pm ($7): Improvisors make up a brand new play in the style of William Shakespeare at The PIT Underground: As You Will: Shakespearean Improv

8:30 pm ($5): Musicians and/or comics perform and are interviewed about “that one song you’ll never forget” at Astoria Queens’ QED: A Place to Show & Tell (27-16 23rd Avenue) hosted by Patrick Cartelli & Evan Forde Barden: Repeater: A Little Show About Big Songs

9:30 pm ($7): Improv group Higgins looks at the Instagram photos of audience members and then uses them as springboards for comedy scenes at the UCB East theatre: Higgins: The Instagram Show

9:30 pm ($10, or just $1 with student ID): Students from all around the city are invited to come watch and perform improv scenes at The PIT Underground: NYC Student Improv Jam

This entry was posted on Sunday, May 7th, 2017 at 10:19 am and is filed under Best New York Live Comedy Shows. You can follow any responses to this entry through the RSS 2.0 feed. You can leave a response, or trackback from your own site.