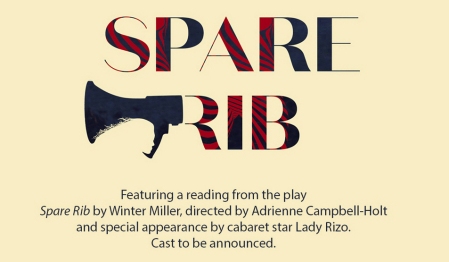 An acclaimed comedic work-in-progress about abortion rights by playwright & activist Winter Miller gets a staged reading with a cast that’s likely to be stellar—see a write-up from The New Yorker about a previous reading here—directed by Mikhael Tara Garver, and with music from Grammy-winning cabaret star Lady Rizo, with proceeds going to the National Network of Abortion Funders’ Dr. Willie Parker Fund which supports safe, affordable, compassionate abortions for women in Alabama and Georgia: Spare Rib (8:00 pm, $20 suggested donation (or whatever you can afford), Judson Memorial Church at 239 Thompson Street)

[$] 11:00 pm ($20): A kid-friendly and autism-themed musical that “promotes positive messages of creativity, niceness, acceptance, and frivolity” by Lard Dog and his 6-piece Band of Shy at The PIT Mainstage: Life’s a Real Dream: Autism-Friendly Edition

[FREE; reserve tickets here] 1:00 pm: A rare lunchtime stand-up show for families, with all kids under 15 allowed on stage to tell a joke, at The Creek upstairs theatre in Queens’ LIC (10-93 Jackson Avenue) hosted by Paul Bennett: Guess What?

[$] 2:00 pm ($20): A kid-friendly musical—without the autism theme of the 11:00 am show—that “promotes positive messages of creativity, niceness, acceptance, and frivolity” by Lard Dog and his 6-piece Band of Shy at The PIT Mainstage: Life’s a Real Dream: Standard Edition

6:00 pm ($7): A one-woman show by Malú Huacuja del Toro described as “a politically incorrect monologue on how to be a Mexican feminist in 15 minutes” at The PIT Underground: Quixota in the Time of Trump

7:00 pm ($10): 75 minutes of sketch comedy from group Teen Radio, plus an opening set from stand-up David Morton, at The PIT Underground: Teen Radio

8:00 pm ($10): Comics compete in “a gauntlet of trivia and challenges that, ultimately, don’t quite make sense” at The PIT Underground hosted by Ganesh Nair & Ryan Stanisz: Lightning Round: A Comedy Game Show

10:00 ($5): Comics compete in freestyle rap games and battles, with the prize being stage time, at The Creek downstairs lounge in Queens’ LIC (10-93 Jackson Avenue) hosted by Noah Savage with DJ Will Winner: So You Think You Can Rap

[TOP PICK] 10:30 pm ($10): Long form improv about the behavior of a theatrical troupe both on-stage and off-stage, revolving around a different show biz theme each time—which this week is Shakespeare—at The Magnet: The Cast: Shakespeare Edition

10:30 pm ($5): Comics pretend to be infants at The PIT Underground: Babies Night

[TOP PICK] 11:30 pm ($7): Sketch comedy that aims to have you “laughing until blood pours out of your throat and eyes and you die and you go to hell and you’re like ‘god damn that was worth it!’ to Satan and he’ll be like ‘Yeah, I know, I was there, it was dope'” at the UCB East theatre: O.S.F.U.G. A Fast Fuckin’ Sketch Show

This entry was posted on Saturday, May 20th, 2017 at 10:20 am and is filed under Best New York Live Comedy Shows. You can follow any responses to this entry through the RSS 2.0 feed. You can leave a response, or trackback from your own site.