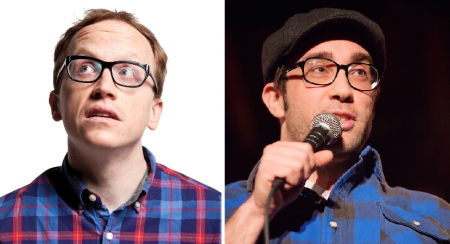 7:00 pm ($7): Sketches about recent political events—which lately has offered an embarrassment of riches—at the UCB Chelsea theatre: The Swamp: This Week in Politics

8:00 pm ($7): The techs who are normally in the back booth handling the sound & lighting step into the spotlight for this show that gives them their chance to shine on The PIT Underground stage: Blackout: Indie Tech Takeover

9:00 pm ($10): This month’s theme is Escape Puzzle, featuring clues integrated into the venue and the show from five-guy improv group No Feelings, plus guest comics Lynn Bixenspan and Daniel Rathburn, and magician Igor Vincenzoat, all at Astoria Queens’ QED: A Place to Show & Tell (27-16 23rd Avenue): No Feelings: Escape Puzzle

9:00 pm ($7): Improvisors make up scenes with the lights turned off, using everyday objects to add layers of sound—like a radio play created on the spot—at The PIT Underground: Blackout: Improv in the Dark

9:30 pm ($7): At the UCB Chelsea theatre, a one-man play by Geoff Garlock about memories of a classic music festival: Rock and Roll Will Never Die…

…and in the second other of this double bill, a mild parody of girl bands via “the world’s first Asian-American pop group from the USA. Join Baby Rice, Quirky Rice, Edgy Rice, Competitive Rice, and Brown Rice as they kick off their tour by dancing, singing, and rapping about boys, friendship, and systemic racism/oppression:” AzN PoP!: Live in Concert

[TOP PICK] 10:15 pm ($5): At the UCB East theatre, an improv show will somehow be performed in both English and Spanish by bilingual comics—including Charlie Todd and Morgan Miller—that springboards off an interview with an audience member about an experience in a Spanish-speaking country or with a Spanish-speaking person: Fifty/Cincuenta

10:30 pm ($7): Improvisors make up scenes that somehow involve “the exciting world of hobbyhorse competition” at The PIT Underground: Hobbyhorse: The Exhibition

11:00 pm ($7): “Once upon a time The Fat Cat was the hottest jazz club in New York City. On any given night you’d find Miles Davis, Duke Ellington, or that kid from the movie Whiplash making sweet music. Unfortunately The Fat Cat is closing up shop to be replaced by a room full of dumpsters for Chipotle. Help say goodbye with a night of music, reminiscing, and all kinds of fun” at the UCB Chelsea theatre hosted by Zach Cherry & Paul Laudiero: The Fat Cat’s Closing Night

This entry was posted on Wednesday, May 24th, 2017 at 11:26 am and is filed under Best New York Live Comedy Shows. You can follow any responses to this entry through the RSS 2.0 feed. You can leave a response, or trackback from your own site.