A beloved annual comedy festival that began as a one-time joke kicks off its 10th Anniversary, running today through Tuesday at Brooklyn’s The Bell House and Union Hall. Tonight’s shows are:

• 7:00 pm ($15): Hosts Blythe Roberson (The Onion, McSweeney’s, TheNewYorker.com) & Madelyn Freed (The Annoyance) give a comedic lecture on a scientific topic, aided by tonight’s guests Harris Mayersohn, Jaboukie Young-White, and Bennett Ferris, and then bring on stage an actual scientist who will point out all the things they got wrong at Brooklyn’s Union Hall (702 Union Street; take R subway to Union Street): The Scientists

…or come see a superb solo show by Jamie Aderski that provides exceptionally honest and funny tales of what it was like for Jamie to become a mom (for a trailer, place click here): Cry Baby: My (Reluctant) Journey Into Motherhood (7:00 pm; $7, The PIT Mainstage at 123 East 24th Street)… 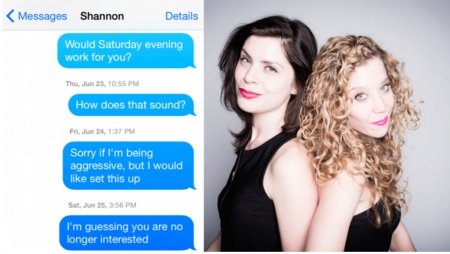 …and while you’re at The PIT, enjoy dynamite comedy duo Jen Jamula & Allison Goldberg (just back in NYC after conquering LA; producers & stars of Blogologues) share audience break-up texts, plus screen shots of their favorite relationship dumps found on the Net, in this fast-paced and hilarious interactive show: How to Break Up By Text (8:00 pm, $15, The PIT Mainstage at 123 East 24th Street)

[TOP PICK] [$] 7:00 pm ($15): A play co-written & performed by Elana Fishbein & Elena Skopetosunique, and co-written & directed by Peter McNerney, about a family’s reluctant reunion received a rave from The New York Times’ Elise Czajkowski, and is being briefly revived for three Saturdays this month at The Magnet theatre: Sisters Three

[TOP PICK] [$] 7:30 pm ($12): One of the very best shows at UCB Chelsea is by Jay Malsky, a super-charged & hilarious character comic who also sings beautifully. This 25-minute solo musical shows off all of Jay’s strengths, as he plays a variety of women whose boyfriends he stole. With musical direction by Jody Shelton, choreography by Zak Sommerfield, and taped vocals by David Carl & Taylor Ortega, this production establishes Jay Malsky as a vibrant rising star with a great comedy career ahead of him. If you’re in the industry and looking for fresh talent, come check this out: Jay Malsky Slept With My Boyfriend! (on a double-bill with Obama Daughters)

7:30 pm ($7): Lend your laughter to Will Abeles recording 30 minutes of stand-up for an upcoming comedy album, with an opening set by Joe Pera (Conan O’Brien, Seth Meyers, Comedy Central, Adult Swim), at The PIT Underground hosted by Caitlin Peluffo: Will Abeles Album Recording

[TOP PICK] 9:30 pm ($10): A comedic play written and starring Ian Lockwood & Sophie Zucker, and directed by Philip Markle, in which “Baby Jessica was the first child to fall down a well, thereby capturing the nation’s attention and becoming America’s sweetheart overnight. Baby Ian will be the second” at The PIT Mainstage: Baby Ian Falls Down a Well

[TOP PICK] 11:00 pm ($7): In this unique spin on musical improv, comedy duo Maggie Lalley & Jillian Vitko ask the audience to suggest a location, a victim, and a crime, and then make up a musical that tells the story of that felony at The PIT Mainstage: True Crime: The Musical

[TOP PICK] Midnight ($7): A unique show based on the premise “Let’s be honest, love doesn’t exist, couples suck, and Valentine’s Day is bullshit. We test real life couples to see if they are meant to be together (they aren’t). The couple with the least amount of points at the end of the night will have to break up, because we all die alone anyway and what’s the point of anything really? It’ll be fun!” at UCB East hosted by Carly Ann Filbin: Let Me Break You Up: An Anti-Dating Game Show