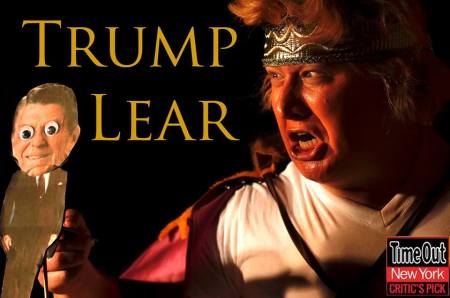 What follows is a complex blend of Carl’s impersonation of Trump, unusual performances of scenes from King Lear (involving toys, paper puppets, and impersonations of a host of characters ranging from Ronald Reagan to Miss Piggy), and frequent conversations between Carl David as struggling artist and Trump as supremely successful showman.

The key power of this production is actually in the latter. Carl David is played as a poor, bumbling artist who makes most of his living from Trump impersonations, yet has devoted his life to achieving and conveying truth. In contrast, Trump has won the greatest power in the world—President of the United States—by embracing and perpetually dispensing lies. The tension between those two extremes is sometimes electric. Plus there are moments when Carl makes himself so vulnerable that this play achieves a feeling of realness managed by few productions, be they comedy or drama.

David Carl is a special comic, and this is a show worth experiencing. Trump Lear is running for just two more performances, this Saturday and next Saturday at 2:00 pm at Under St. Marks at 94 St. Marks Place, off First Avenue. Tickets are an extremely reasonable $20…and typically include free brownies baked by the multi-talented Carl himself.

6:00 pm ($7): Springboarding off the Food Network’s Cutthroat Kitchen, this show pits three improv groups against each other by making them meet multiple challenges while encouraging them to try to sabotage each other at The PIT Loft (154 West 29th Street) hosted by Harry Marker: Cutthroat Improv

7:00 pm ($7): Reveal a deep secret so improvisors—including improv puppets by Josh Cohen & Tamra Malaga—can make up scenes about it at The PIT Mainstage directed & hosted by Liz Magee: Shhhh

7:30 pm ($10): May Wilkerson, Brian Parise, Martin Urbano, and Conrad Roth share with you things they feel you really ought to know at Astoria Queens’ QED: A Place to Show & Tell (27-16 23rd Avenue) hosted by Colum Tyrrell & Lev Fer: Sh*t You Should Know: An Educational Comedy Show

9:30 pm ($10): Improvisors make up scenes of a relationship springboarding off an audience-supplied wedding announcement in The New York Times at The PIT Loft (154 West 29th Street): Forever: Improv Inspired by NYT Wedding Announcements

9:30 pm ($10): Springboarding off “a trend in Hollywood where instead of writing original stories with female protagonists, lady actors are given dusty scripts that men already used,” in this sketch show female comics perform their versions of all-gal reboots of popular movies at The PIT Mainstage directed & hosted by Liz Magee: Al Female Reboot