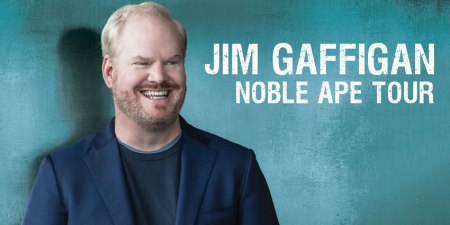 Jim Gaffigan is a comedy superstar who delights in observational humor about food (his Hot Pockets routine is a classic) and mundane things we take for granted (“I like escalators because they can never break, only become stairs”). As accessible as any mainstream performer alive, while simultaneously a sharp deconstructionist who can work any alternative comedy room with ease, his appeal is deep and universal. The star of The Jim Gaffigan Show, he’s also appeared over a dozen times on David Letterman and over two dozen times on Conan O’Brien (for which he created the animated series Pale Force); released numerous bestselling comedy albums, including Cinca, Mr. Universe, Obsessed, Beyond the Pale, and King Baby; and wrote the bestselling books Food: a Love Story and Dad is Fat. And he’s headlining tonight through Saturday in NYC as part of a national tour: Jim Gaffigan: Noble Ape (8:00 pm, $40-$75, Beacon Theatre at 2124 Broadway between West 74th and 75th Streets)…

…or experience this show in which comics Andy Hilbrands, Madde Gibba, and Jack Frederick have answered seemingly creepy Internet ads to find out whether they were predatory traps or relatively innocent so you can “Laugh. Learn. Cringe:” Fishing For Creeps: A Reverse Catfish (9:00 pm; $7, The PIT Underground at 123 East 24th Street)

7:00 pm ($7): Springboarding off an audience suggestion, improvisors provide a close look at some exotic group or subculture at The PIT Loft (154 West 29th Street): DocuProv

[$] 7:00 pm ($20): Peter Michael Marino plays around with the audience in a mix of improv and scripted comedy (with staging by stellar director Michole Biancosino), and then attempts to pull off the very difficult feat of creating an entertaining one-man improv show inspired by what he’s learned about the audience at Under St. Marks (94 St. Marks Place, off First Avenue), running tonight, tomorrow and Saturday: Show Up

7:30 pm ($7): A rotating cast of professional clowns perform a silly show in hopes of changing your life at The PIT Underground hosted by Joe Galan & Kim Kaiser: An Unapologetic Mess: A Clown Show

[TOP PICK] 8:00 pm ($5): Storytellers share their true “coming out” tales, and then improvisors make up either a play or a musical based on each story at The PIT Mainstage: Thank You For Coming Out: An LGBTQIA QueerCom Event

8:00 pm-Midnight ($10 for the entire evening): Four veteran house improv groups starting at 8:00 pm, themed improv show The Setup at 10:00 pm, and improv competition Inspirado at 11:00 pm, all for just $10 at The Magnet theatre: The Magnet’s Thursday Night Out

[FREE] 8:00 pm: “Comics compete with on-the-spot tweets…and you decide the winner in real time using your smart phone” at The Creek upstairs theatre in Queens’ Long Island City hosted by Shelby Taylor: Like Me

9:00 pm ($10): A show that’s live streamed on Facebook interviews a comic TBA who eats a one-handed snack while playing Jenga (as soon as the tower falls, the interview is over). In addition, stand-up or storytelling is performed on the theme “Everything is Falling Apart” by comics Joe Albano, David De Almo, Barbara Begley, Mary Brownlee, and Sandy Chansamone, all at Astoria Queens’ QED: A Place to Show & Tell (27-16 23rd Avenue) hosted by Molly McGaughey: Everything is Falling Apart

9:30 pm ($7): The greatest science fiction anthology radio show of all time was X Minus One. Improvisors who know their genre history created this show in which they make up scenes of awe, mystery, and wonder at The PIT Mainstage co-starring the spectacular Rachel Scherer, plus Geoff Grimwood, Jonathan Desley, Luis Fernandez, and Austin Sanders, with sound design & foley effects from Frank Todaro, and an opening musical set from improv singer Trudy Carmichael & ace improv pianist Dan Reitz: X Plus One