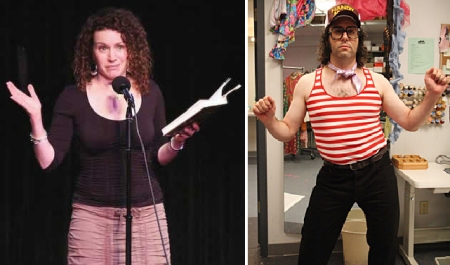 Stars are headlining at the Carolines Comedy Club: For tonight only, "Curb Your Enthusiasm's" Susie Essman; and tonight through Sunday, "30 Rock's" Judah Friedlander

[TOP PICK] [$] 7:30 pm ($20 & $15 food/drink min.): One of my favorite FringeNYC shows back in 2004—and which was later made into a movie!—about a husband who decides he wants his arms cut off. It’s a mix of drama and very dark comedy…and well worth catching. This is a one-night-only staged reading as part of the gala FringeNYC 15th Anniversary All-Star Series at the Laurie Beechman Theatre, inside the West Bank Cafe (407 West 42nd Street, off Ninth Avenue): Armless

[TOP PICK] 8:00 pm ($5): This revival of one of my all-time favorite UCBT shows involves a group of stellar comics taking an audience suggestion and, while sipping beers, telling personal tales related to it—with an emphasis on the ribald and ridiculous, just like what you’d want to hear from your friends while hanging out at a bar. The yarn spinning is great fun; but on top of that, when the performers hear a story that especially tickles them, they’ll jump up and instantly create scenes revolving around it. And because these talents are razor-sharp improvisors, the results are hilarious. Just as a sidenote, this show used to include world-class storyteller Chris Gethard—and whenever Chris opened his mouth, everyone else went dead silent as if God was about to speak. (Yes, Chris is that respected by his peers.) Chris is no longer the lineup (he’s too busy with his weekly TV series); but this is a fine show regardless thanks to such brilliant improvisors as Anthony King, Charlie Todd, Will Hines, John Frusciante, and Fran Gillespie, all at Happy Hour

[TOP PICK] 8:00 pm ($8): Wonderful comic Kurt Braunohler “relates how he destroyed a 13-year relationship in the dumbest, most complicated way possible, with bar fights, naked men, walruses, and an audition for Sasha Baron Cohen” in the one-man show The Amish Guide to Fucking

[TOP PICK] 8:00 pm ($7): Some of the Magnet Theatre’s finest improvisors make up theatrical plays on the spot: Playhouse

[TOP PICK] 9:30 pm ($5): Steve Soroka has a talent for working with brilliant, beautiful women—e.g., Mamrie Hart in sketch duo BoF, and Amy Heidt in UCBT Maude team Dweeb. Tonight Steve does it again, teaming up with Jen Curran for an improvised relationship: An Evening with Jen & Steve

9:30 pm ($5): Improvisors (not announced) make up one-act plays on the spot at The PIT’s basement lounger for The Scene

[TOP PICK] [$] 10:00 pm ($27.50 & 2-drink min.) Judah Friedlander is a hilarious stand-up and occasional agent of chaos. Judah is a cast member of 30 Rock, and has also performed on VH1’sBest Week Ever, HBO’s Curb Your Enthusiasm, MTV’s Wonder Showzen, and NBC’s The Tonight Show. In addition, Judah has acted in over 20 films, including such hit comedies as Meet the Parents, Zoolander,  and Full Grown Men. Judah was nominated for an Independent Spirit Award for his role in American Splendor. When asked in an interview about his influences, Judah responded: “Audiences. They are often the forgotten ingredient in stand-up comedy. Stand-up is live entertainment, and a live audience is needed. Also, whatever is happening at the moment. I play off of that. The moment is a big influence. If you’re not playing the moment you’re not doing stand-up comedy–someone just reciting material but not responding with what’s going on in the room is not stand-up comedy.” This playful, anarchic, in-the-moment comedy veteran—and author of the book How to Beat Up Anybody—is headlining tonight through Sunday at Carolines: Judah Friedlander

[TOP PICK] 11:00 pm ($5): Improv troupe Doppleganger has a history of toppling champions. So when it up against relatively young troupe Dance Break last week, it not only won but crushed, garnering a staggering 117 audience votes to a mere 16 for its opponent. Tonight the three gals of Doppleganger face a single opponent: Fran Gillespie. And it should be awesome. Come see these fierce competitors fight for audience laughs and votes at the raucous Cage Match

11:00 pm ($5): NYC stand-ups (not announced) performing at The PIT for this comedy club-style (i.e., long set) weekly show hosted by Harrison Greenbaum: The Big One

This entry was posted on Thursday, July 14th, 2011 at 9:22 am and is filed under Best New York Live Comedy Shows. You can follow any responses to this entry through the RSS 2.0 feed. You can leave a response, or trackback from your own site.