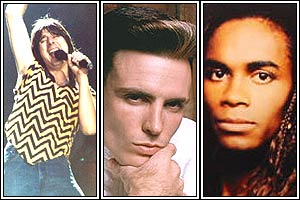 Some of the best comics of UCB East present some of the worst music you'll ever see...

[FREE] 6:00 pm (please note new earlier time): Open-mic storytelling, with each of the four audience members chosen from the bucket of names getting to tell tales for 7 minutes each at The PIT downstairs lounge along with host Jake Hart: The Dump

8:30 pm ($7): Improv at The Magnet that flows from moment to moment, with no sweeps or tag outs—”each exit starts a new scene, while performers use devices ranging from monologues to in-scene questions to break into characters and relationships quicker and deeper:” Scoresby

[FREE] 9:30 pm: Improv spinning off sets by NYC stand-ups (not yet announced, but you can check for an update here or here) at The Creek upstairs theatre in Queens’ Long Island City with host Micah Sherman: Fun

10:00 pm ($5): A new variety show in which comics perform characters, stand-up, and other bits at The Magnet hosted by Jon Bander: What’s to Get?

This entry was posted on Monday, April 23rd, 2012 at 9:38 am and is filed under Best New York Live Comedy Shows. You can follow any responses to this entry through the RSS 2.0 feed. You can leave a response, or trackback from your own site.