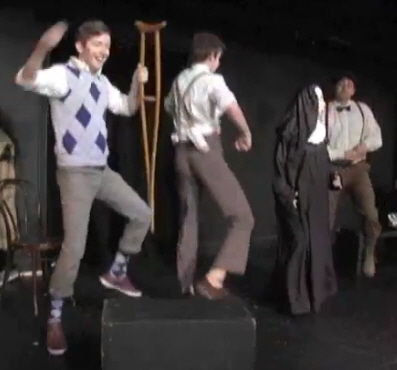 A dancing orphan named Cripply, a sex cult that eats orphans, and more in the 30-minute dark musical Newsadoozies… 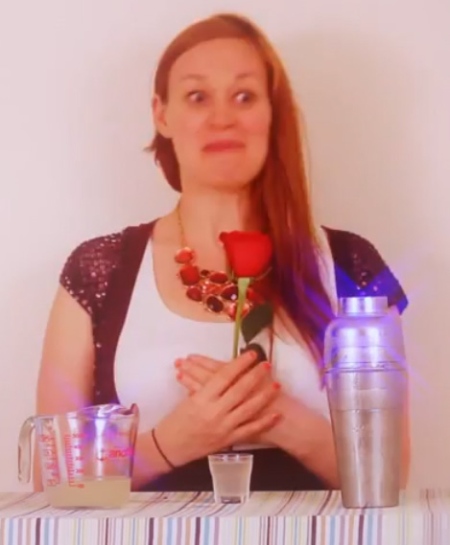 …and the unsinkable Mamrie Hart (above) and Stephen Soroka performing as comedy duo BoF: Friends Without Benefits

…and in the other half of this double-bill: Comedy genius Kate McKinnon used to dominate UCB Chelsea with her dark and deliciously quirky sketch shows. Now Kate is at Saturday Night Live, the show she was born to shine on. Meanwhile, nobody on an NYC stage has really stepped into the void Kate left…but this show is the closest I’ve seen so far as a contender. Sue Galloway delivers smart, organic, beautifully crafted physical & verbal comedy that’s fresh, specific, at times surreal, and very funny. It’s no easy thing to walk the tightrope between darkness and hilarity, but Sue manages it here with impressive grace. Kudos also go to UCBT’s Artistic Director Nate Dern, who did a brilliant job of providing guidance and judgment as the show’s director. Ignore this production’s lame title and official description, which don’t do it justice, and simply come to see one of the best one-woman sketch shows of 2012: Pose

[TOP PICK] 9:00 pm ($5): Neil Casey & Anthony Atamanuik, both genius members of Death by Roo Roo, perform the jaw-dropping feat of making up an entire feature film at UCB East as The Two-Man Movie

…and in the other half of this double-bill, unique and relentlessly silly performer Brandon Gulya does a one-man sketch show at UCB Chelsea that’s at times hilarious (the restaurant bit, which is an instant classic) , and at other times less so, in the hope that Brandon Gulya Will Be Famous Soon

[TOP PICK] [FREE] 11:00 pm: The wonderful Sasheer Zamata (Doppelganger) hosts as many as a dozen guests packed into 75 minutes performing stand-up, improv, sketch, and occasionally acts that defy categorization. The level of talent can vary wildly, but for some (like me), that’s part of the laid-back fun; and this is often one of the most amazing comedy shows in town. (Tonight’s scheduled lineup includes Becky Yamamoto and Brandon Gulya; for the complete list, please click here.) Come support the experimentation, and periodic magical surprises, that this uniquely organic rollercoaster of a weekly show at UCB Chelsea makes possible—and don’t forget to toss $1 in the bucket on your way out: School Night

This entry was posted on Wednesday, May 16th, 2012 at 8:31 am and is filed under Best New York Live Comedy Shows. You can follow any responses to this entry through the RSS 2.0 feed. You can leave a response, or trackback from your own site.