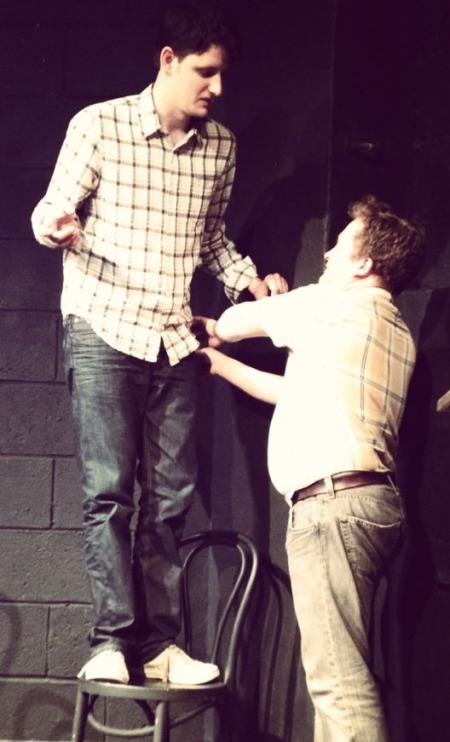 7:00 pm to 12:30 am ($7 for the entire evening): Five and a half hours of improv from eight groups at The Magnet theatre: Magnet Megawatt

7:00 pm ($5): Jake Hart, Sue Smith, Justin Akin, and Geoff Grimwood are panelists for this game in which “four smart, funny people are quizzed on odd and obscure bits of trivia that just might save your life (probably not, though)” at The PIT downstairs lounge hosted by MIchael FIsher: Pop Quiz Hotshot

[TOP PICK] 8:00 pm ($5): At UCB Chelsea, the wonderful Amy Heidt comes back to us from LA to perform a new one-woman show about “a community theater production of The Sound of Music:” A Problem Like Maria…

…and in the other half of this double-bill, Jim Santangeli and Nate Smith try to determine Who’s More Awesome?

9:30 pm ($5): “Jonathan Blank and Samara Doucette say what everyone else thinks on dates, but never says; so join them and guest comedians as they divulge all of their wildest and most embarrassing dating stories. This monthly storytelling show contains the truth and nothing but the truth, but most of the stories are more surreal than if David Lynch directed romantic comedies. Everything from wild hookups to emotional breakups are on the table.” Tonight’s storytelling guests (not announced) perform at The PIT downstairs lounge: This is Awkward: True Stories of of Love, Lust, and Lubrication

[TOP PICK] 10:00 pm ($5): The instructors of UCB’s classes include some of the finest improvisors in the country. In this weekly show a bunch of them get on stage at UCB East, along with hosts Betsy Stover and Ari Voukydis: Hot for Teacher: The UCB Faculty Show

[TOP PICK] [FREE] 11:00 pm: The wonderful Sasheer Zamata (rapidly rising star; Comedy Central’s Inside Amy Schumer, MTV’s Hey Girl, FX’s Totally Biased, Apple Computer commercials; improv groups Doppelganger and Bucky) and Charla Lauriston host as many as a dozen guests packed into 75 minutes performing stand-up, improv, sketch, and occasionally acts that defy categorization. The level of talent can vary wildly, but for some (like me), that’s part of the laid-back fun; plus Sasheer is going to be a huge star, so catch her in this intimate setting while you can. (Tonight’s scheduled guests include Streeter Seidell; for the complete list, please click here.) Come support the experimentation, and periodic magical surprises, that this uniquely organic rollercoaster of a weekly show at UCB Chelsea makes possible—and don’t forget to toss $1 in the bucket on your way out: School Night

7:00 pm ($2, which includes a free beer or water): Open mic stand-up providing a whopping 10 minutes per comic. Email PhoningItInMic@gmail.com with subject line Phoning Wednesday to sign up; or take a chance at lottery sign-up live between 6:45 and 7:45 at Brit Pack Studios (153 Lafayette Street, 3rd Floor) hosted by Lizzie Martinez: Comics Phoning It In

[FREE] 11:00 pm: Your opportunity to perform on the stage of UCB East with improv veterans, hosted by UCBT Harold Night house group Bucky and DJ Cipha Sounds: The Improv Jam

[FREE] 11:00 pm: Your chance to perform on stage with experienced improvisors at The PIT upstairs theatre hosted by Lucas Hazlett: Improdome

[FREE] 11:30: Sign up at 11:00 pm for the opportunity to make up scenes at The Magnet with group Bloomer: Magnet Improv Mixer