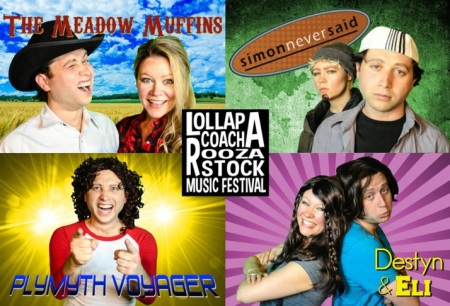 Go see this keenly observed and hilarious parody of the affectations of various types of music stars, ranging from bubble gum pop to country to rock, playing at FringeNYC today at 2:00 pm and Saturday at 9:00 pm: “Lollapacoacharoozastock Music Festival”

Most genuine apologies; I got food poisoning yesterday,
and have been able to do virtually nothing but sleep and heal today.
Full comedy listings will resume tomorrow.

[TOP PICK] [$] 8:00 pm ($16.52 in advance online, $20 at the door): A top-notch theatrical troupe that’s equally fine at compelling acting and split-second comedy uses actual material on the Web, performed verbatim, to craft laugh-out-loud scenes. This 14th edition of the series (begun in 2011) focuses on our favorite place in the world: New York City. While everyone in the cast is exceptional, standouts such as Wendy Joy, and the show’s producers Allison Goldberg and Jen Jamula, are worth the trip all by themselves. For a video sample (a pale shadow of the live show), please click here. Another reviewer called this “like Forbidden Broadway for the Internet,” and that’s pretty close to the mark. The show is running tonight and tomorrow at 8:00 pm. Grab tickets in advance before it sells out, and then enjoy this production at Under St. Marks (94 St. Marks Place): Blogologues: New York F#cking City

[FREE] 7:00 pm: Open-mic stand-up, with 3 minutes per comic (unless not many folks show up, in which case there’ll be more time), with names drawn out of a bucket at UCB East in the bar area (“Hot Chicks Room”) hosted by Nate Dern, Sarah Tollemache, and/or Paul Oddo: The Friday Night Hot Chicks Open Mic

[FREE] 11:00 pm: An open-mic show that’s first come, first serve, with each comic getting 5 minutes on stage at The Creek downstairs lounge in Queens’ Long Island City: Mic and Cheese