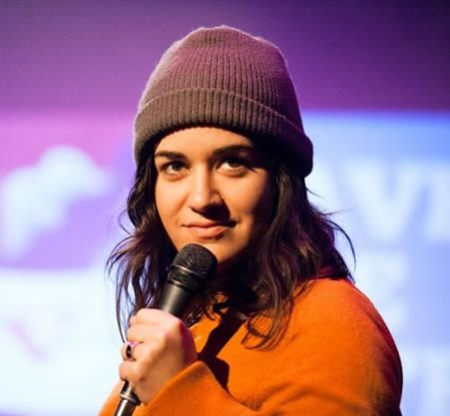 …and Sabrina Jalees (above), Dave Hill, Brooks Whelan, and more answer the question I’m New Here, Can You Show Me Around?

[TOP PICK] 1:00 pm ($30): There are hundreds of walking tours in NYC, but my favorite so far has been this guide to artwork in the New York subway system. While tour guide Phil Desiere isn’t in any way a comic, the artwork itself primarily is comedic (and often includes a comic book sensibility). If you’d enjoy having your eyes opened to the whimsical art strewn around heavily traveled NYC subway stations that millions of busy commuters never notice, treat yourself to this 2½ hour tour happening on Tuesdays, Thursdays, and Sundays at 1:00 pm: New York City Subway Art Tour

[TOP PICK] 7:00 pm-11:00 pm ($7 for the whole evening): In this 4-hour extravaganza, seven of The Magnet’s improv groups make up musicals based on audience suggestion, creating epic stories on the spot using song and dance:Magnet Musical Megawatt

7:00 pm ($5): A one-woman show in which “travel expert Christine Liz Pynn offers a seminar on how to prepare for your next business trip or vacation” at The PIT downstairs lounge: Travel Tips

7:30 pm-9:15 pm ($5): Long form improv known as The Harold from UCB Chelsea house groups Greg, Grammer, and Women & Men at this first half of Harold Night

[TOP PICK] 8:00 pm ($5): A monthly show about obsessions with pop culture, tonight revolving around Reality TV(with guests not announced) at UCB East hosted by Damian Bellino & Anne Rodeman: So Into It: A Fanatic Variety Show

9:15 pm-Midnight ($5): Long form improv known as The Harold from UCB Chelsea house groups Smalls, Apollo, and Higgins at this second half (continued from 7:30 pm) of Harold Night

[TOP PICK] [ALMOST FREE] 6:00 pm ($1): In this delightful weekly open-mic show, each comic has 3-5 minutes to try out a character-based bit (e.g., for a solo show, sketch, or audition) at The PIT downstairs lounge, hosted by Keisha Zollar (Doppelganger): Imposter Open Mic