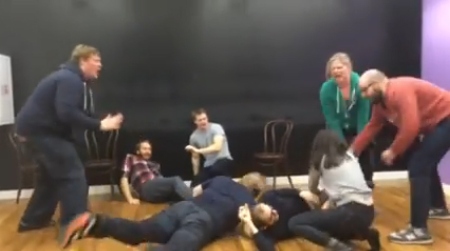 …and huge, huge congratulations to Harold Night improv group The Enemy for a brilliant and well-deserved win last night of the prestigious 2014 Cage Match Championship

[TOP PICK] [$] 7:00 pm & 9:00 pm ($45 at the door, or $44 online using discount code DGPPT): UK star, connect-the-dots adventurer, and Internet prankster comic Dave Gorman briefly performs in NYC (tonight and Saturday only) a one-man show that’s essentially about how we can create any identify we like using credibility tools such as Wikipedia and Microsoft PowerPoint at Subculture (45 Bleecker Street, right next to the #6 subway’s Bleecker Street stop): Dave Gorman’s PowerPoint Presentation

7:00 pm ($7): “It’s important to stay informed. That’s why we bring you all the news that happened this month, at the end of this month. Just your average news show, keeping you up to date with your world one month at a time” atThe Magnet written & performed by Jarret Berenstein: Current Events

7:00 pm ($10): An improvised musical made up on the spot at The PIT upstairs theatre by The Shady Bunch

7:00 pm ($5): Three improv teams compete in this cutthroat battle for laughs. What’s different about this cage match is it’s judged by a dog. Every week features a new human guest judge—whose opinion doesn’t really matter—and a guest canine judge who will actually decide the fates of everyone based on which bowl this dog goes to first. It all happens at Brooklyn’s The Annoyance Theatre (367 Bedford Avenue; take J/M/Z to Marcy Avenue or L to Lorimer Street): Dog Fight

[TOP PICK] [FREE] 8:00 pm: “Each stand-up will do his or her set, and then host JoAnna Ross will conduct an interview about the comic’s dating life. Questions you always wanted to know will be asked: Where do you take a first date to get laid? Do you pay? Where do you take a date to break up with them? What bathrooms have you done it in?” and much more at The Creek upstairs theatre in Queens’ Long Island City: The Undateables

8:00 pm ($8): Sketch comedy group Richard will try to make you laugh for an hour at Brooklyn’s The Annoyance Theatre (367 Bedford Avenue; take J/M/Z to Marcy Avenue or L to Lorimer Street): Richard

[TOP PICK] [$] 9:00 pm ($15; SOLD OUT of seats, but there’ll be a standby line if you’re okay with standing): Some of the finest improv in the country from brilliant comics Shannon O’Neill, Silvija Ozols, Jordan Klepper, Connor Ratliff, Don Fanelli, and/or Michael Delaney forming a seamless and hilarious group mind at UCB Chelsea—the all-star members of The Stepfathers

[TOP PICK] 10:00 pm ($10): Singing improvisors at The Magnet using an interview with an audience member to craftThe Made-Up Musical

[FREE] 10:00 pm: NYC stand-ups share their process by trying out the freshest ideas from their notebooks at The Creek upstairs theatre in Queens’ Long Island City: Notebook Night

11:00 pm ($10): “You’ve been letting negativity into your life, and it’s degrading. Please join nationally respected public speaker and lifestyle icon Matt Rogers (who is in good health, despite reports claiming otherwise) for his lecture on living, laughing, and leaping into the Positive. It’s Time To Re-Begin” at The PIT upstairs theatre: I’m Positive!

11:00 pm ($10): Sketch comedy blended with dance, poetry, and live music at The PIT downstairs lounge from groupHis Majesty, The Baby

11:30 pm ($7): There’s no description for this show, so your guess is as good as mind. All I can tell you is it happens at the Magnet theatre: Drunk Interviews With Historians

[TOP PICK] Midnight ($5): “Join our Broadway Babies as they showcase the best theatre/musical theatre/dramatical talent in all of Greater Kankakee (and even beyond maybe, thanks to our “Expanding Our Horizons” Study Abroad Programs). Though most of us have never left Kankakee, audiences will get a peek at our own brand of that ol’ razzle dazzle in a variety of theatrical and musical theatrical acts that will be sure to catapult our young talent directly to The Great White Way! That means Broadway!” at UCB Chelsea hosted by Siobhan Thompson & Timothy Dunn: The Staircase to Broadway

Midnight ($5): A screening of an indie horror feature film written & directed by Brant Sersen (Blackballed: The Bobby Dukes Story, Splinterheads) starring Ben Rogers, Justin Purnell, Tim Martin, Don Fanelli, Kate Riley, Megan Neuringer, and more. The story: “On New Year’s Eve in 1955 Richard Howell, a patient at the Hillcrest Sanatorium, went on a bloody rampage, killing three children before he hanged himself. Fifty-six years later, a team from the popular TV series Ghost Trackers prepares to spend the night at the sanatorium. They hope to capture paranormal activity for the entertainment of their show’s fans. Instead, they unleash a horrifying force of evil hell-bent on their destruction” at the UCB East theatre (which is ideal for screenings because it used to be an indie movie theatre):Sanatorium