TV Alert: David Letterman and Tony Danza are hosted
by Regis Philbin on The Late Late Show;
Patton Oswalt is on Jimmy Fallon (repeated from 1/6);
Wyatt Cenac is on Carson Daly (repeated from 10/27/14);
Jim Norton, John Roy, and Kurt Braunohler are on @midnight;
episode 3 of the final season of Kroll Show airs at 10:30 pm on Comedy Central

Between the blizzard and the NYC transit system shutting down, on Monday night most comedy venues (and Broadway theatres, for that matter) canceled their shows.

The snowstorm turned out to be a normal one for NYC, not the historic one predicted, and so most comedy shows are back on track for tonight. 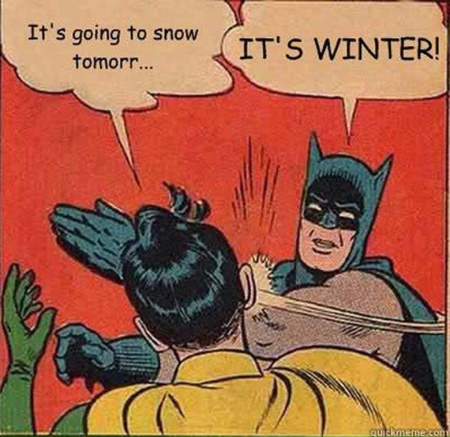 A major cancellation that’s too late to reverse is Louis CK’s final Madison Square Garden show, which was scheduled for 8:00 pm. After the incredible feat of virtually selling out four MSG shows in a row—which translates to selling over 60,000 tickets for an NYC stage within a few weeks—the 15,000+ fans who’d planned to see Louis tonight will have to accept refunds instead. On the up side, Louis released a new stand-up video album today via his website that includes many of the finest bits from the MSG show (including a brilliant sequence about what it’s like to be on a plane holding a crying baby…). To purchase the album, titled Louis CK: Live From the Comedy Store, for a mere $5 please click here.

All that said, back to daily listings:

[TOP PICK] 7:00 pm-11:00 pm ($7 for the whole evening): In this 4-hour extravaganza, five of The Magnet’s singing improv groups make up a musical on the spot based on an audience suggestion, followed at 10:15 by a free showthat lets audience members join in with a musical improv group to make up stories in song: Magnet Musical Megawatt

7:30 pm-9:15 pm ($5): Long form improv known as The Harold from UCB Chelsea house groups Grammer, Side Piece, and The Enemy at this first half of Harold Night

9:15 pm-Midnight ($5): Long form improv known as The Harold from UCB Chelsea house groups Smalls, Greg, and Women & Men at this second half (continued from 7:30 pm) of Harold Night

[TOP PICK] 9:30 pm ($5): The brilliant Todd Bieber (Director of Content and Production for UCB Comedy) spearheads this show that screens the work of the UCB video division, and also hosts live stand-up and sketch, all at the UCB East theatre: UCB Comedy Live

[MEGA-TOP PICK] 11:00 pm ($5; SOLD OUT of seats, but you can probably get in if you arrive early and are okay with standing): Chris Gethard (comedy genius; Broad City, Conan O’Brien, The Office, IFC; author of A Bad Idea I’m About to Do and Weird New York, plus My Comedy Album) has been tirelessly running his The Chris Gethard Showon Manhattan Public Access cable and waiting for something good to happen. After years, it has; a cable network is about to pick it up. And to celebrate, the show is returning to where it began…the UCB Chelsea theatre: The Chris Gethard Show

[FREE] 10:15 pm: In this free Magnet show, audience members can join in with musical improv group Pillow Talk to make up stories in song on the spot: Musical Magnet Mixer