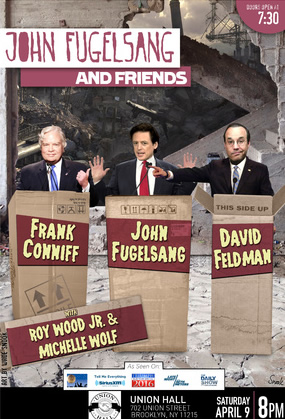 [FREE] 6:00 pm: Ben Conrad, Lizzy Mazzucchelli, Will Carey, and Will Watkins each perform a different 10-minute stand-up every Saturday in April at The Creek’s upstairs theatre in Queens’ LIC (10-93 Jackson Avenue) hosted by Grant Lindahl: The 8

6:30 pm ($5): International improvisors use their native languages & diverse backgrounds to make up scenes in unique ways at The PIT downstairs lounge: Passport

7:00 pm ($10): “On every improv team there is the glue, the person who just tries to hold shit together while everyone descends into madness around them. Longtime UCB performer Silvija Ozols gathers some of her favorite gluey types to perform a fully improvised show. Will they stick to each other? Or will they end up huffing themselves into oblivion? Has this analogy been taken too far or is there room for one last pun? GLUE be the judge!” at the UCB East theatre: Gluebag

[TOP PICK] 7:30 pm ($10): “Created in 1995 at the iO Theater in Chicago, The Armando Diaz Experience is the longest running improv show ever. A guest monologist—who tonight is DJ Louie XIV—takes a suggestion from the audience and shares true personal tales. These stories are then brought to life by a rotating cast of improv all-stars—and occasionally Armando himself” at The Magnet theatre: The Armando Diaz Experience

7:30 pm ($5): Alyson Goodman performs a one-woman show about the awkwardness of growing up at The PIT downstairs lounge: I’m Fine

[TOP PICK] 8:00 pm ($10): A comedic play written by Rollie Williams, with a cast of four, in which “a deadly collapse traps you and the other miners deep and dark, down beneath the surface of the Earth with almost no hope of rescue” at Brooklyn’s The Annoyance Theatre (367 Bedford Avenue; take J/M/Z to Marcy Avenue or L to Lorimer Street): Dark Down Deep Down Dark

[MEGA-TOP PICK] [$] 10:30 pm ($20): Charismatic and hilarious rising star David Carl transforms into Gary Busey—and portrays child-like Busey doing a one-man version of the psychologically complex masterpiece Hamlet. The result is consistently inventive, joyful, and laugh-out-loud funny. This was my second favorite show—out of 196—at the 2014 FringeNYC, went on to further acclaim at the Edinburgh Fringe Festival, and is one of the funniest shows in New York, period. David is reviving his show for a run through this summer at The PIT Loft, starting tonight. If you haven’t seen GBOMH, don’t miss this wonderful opportunity to do so at The PIT Loft (154 West 29th Street). And if you have, share it with a loved one who’s been deprived of GBOMH: Gary Busey’s One-Man Hamlet (As Performed by David Carl)

[TOP PICK] 10:30 pm ($10): Long form improv about the behavior of a theatrical troupe both on-stage and off-stage, revolving around a different show biz theme each week—which tonight is Motivational Seminar—at The Magnet theatre: The Cast: Motivational Seminar Edition

10:30 pm ($5): “A monthly show produced by Anthony Oberbeck; every show is new, every show is beautiful” at Brooklyn’s The Annoyance Theatre (367 Bedford Avenue; take J/M/Z to Marcy Avenue or L to Lorimer Street): Beautiful Horses

[TOP PICK] 11:00 pm ($10): The best title of any show tonight, about a reanimated hand that goes on a sexual rampage set to music—for a video preview, please click here— at at The PIT upstairs theatre (123 East 24th Street): The Disembodied Hand That Fisted Everyone to Death: The Musical

[FREE] Midnight: “Food sketches, street food interviews, and live cooking” at The Creek downstairs lounge in Queens’ LIC (10-93 Jackson Avenue): So You Think You Can Rap

This entry was posted on Saturday, April 9th, 2016 at 11:21 am and is filed under Best New York Live Comedy Shows. You can follow any responses to this entry through the RSS 2.0 feed. You can leave a response, or trackback from your own site.