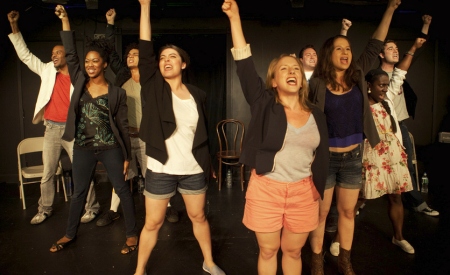 A cabaret of darkly funny songs and topical sketch comedy about culture and politics, following sold out shows at Joe’s Pub and now back at The PIT through July: Political Subversities (8:00 pm, $20, The PIT Upstairs Theatre at 123 East 24th Street)

[TOP PICK] 7:00 pm ($5): Stellar comics Langston Belton & Julie Sharbutt, who used to perform as improv duo Coyote before Julie moved to LA, reunite while Julie’s back in town and invite some other fine improvisors to join them at The PIT upstairs theatre (123 East 24th Street): Coyote and Friends

7:00 pm ($7): “Rob had always thought he was a nice guy who was inept with women. But, looking back on a life of Catholicism, very special episodes, and hitting puberty at sixteen, he’s realized that he might not have been that inept or, unfortunately, particularly nice. He was just a little late” at The Magnet theatre: Late Bloomer

7:00 pm ($5): Three improv teams compete in this cutthroat battle for laughs. What’s different about this cage match is it’s determined by a human judge, the audience…and a dog. If there’s a tie between the votes of the judge and audience, the guest canine will decide the fates of everyone based on which bowl this dog goes to first. It all happens at Brooklyn’s The Annoyance Theatre (367 Bedford Avenue; take J/M/Z to Marcy Avenue or L to Lorimer Street): Dog Fight

7:30 pm ($10): Two improv groups each make up a musical on the spot at The PIT downstairs lounge: [title of team] and Royals

7:30 pm ($5): Seven New York comics telling stories of where they came from—including (Kelly Fastucaone from Australia)—and the journey that led them to NYC performing at Astoria Queens’ QED: A Place to Show & Tell (27-16 23rd Avenue) hosted by Katie Boyle: Transplants

[TOP PICK] 8:00 pm ($10):A comedic play about the US government in 1991 forming a secret agency charged with monitoring and eliminating online internet threats, the Headquarters for Authorizing Computerized Knowledge, at Brooklyn’s The Annoyance Theatre (367 Bedford Avenue; take J/M/Z to Marcy Avenue or L to Lorimer Street): USA_HACK

9:30 pm ($10): Langston Belton, Jay Malsky, Kirsten O’Brien, and other ace improvisors use clips from classic TV shows as springboards for scenes made up on the spot at The PIT downstairs lounge: TGIF-Prov: Improv Based on Classic TV

[TOP PICK] 10:00 pm ($5): “A love letter to beloved shows such as Pee Wee’s Playhouse and Lamb Chop’s Play-Along, comedians Joe Rumrill and Mary Houlihan invite you to a cavalcade of original costumed characters, animations, and sketches from both real humans and puppet humans” at Brooklyn’s The Annoyance Theatre (367 Bedford Avenue; take J/M/Z to Marcy Avenue or L to Lorimer Street): Cartoon Monsoon

10:30 pm ($5): Ginny Leise & Soojeong Son aim to teach you the secrets for career success at The PIT downstairs lounge: Great Gig: A Corporate Training For Business

11:00 pm ($5): A rotating pool of improvisors perform in groups of five at Brooklyn’s The Annoyance Theatre (367 Bedford Avenue; take J/M/Z to Marcy Avenue or L to Lorimer Street): Singles Motel

[TOP PICK] Midnight ($5): A raucous laboratory for wacky ideas, in which comics Jo Firestone, Michael Wolf, Dan Glaser, and Cory Palmer create absurd game shows that they try out using audience members. “After we’ve attempted to create all the game shows, the audience votes on which idea gets to go straight to TV (not really)” at UCB Chelsea hosted by the fabulous Jo Firestone, whose delighted facial expressions in response to the ridiculousness are typically the highlights of the evening: The Incredible Game Show Showcase

[TOP PICK] [FREE] Midnight: Comics perform stand-up sets and then go on dates with each other as part of the live show at Queens LIC’s The Creek upstairs theatre hosted by Rob Harper & Rachel Coleman: We’re Getting Laid

7:00 pm ($5): Show up at 6:45 pm to place your name in a dog bowl for the chance to get called up on stage and jam with veteran improvisors at Brooklyn’s The Annoyance Theatre (367 Bedford Avenue; take J/M/Z to Marcy Avenue or L to Lorimer Street): Dog Fight