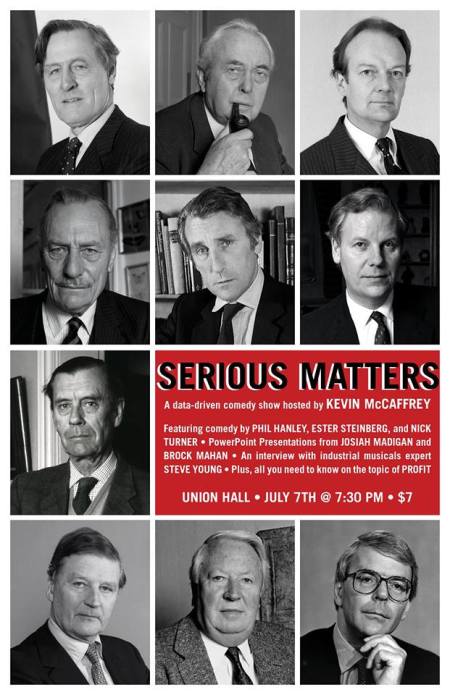 7:00 pm ($5): “Social media meets improv as graduates of the PIT Improv Program transform their innermost tweet- and blog-length thoughts into scene after scene, all inspired by a single suggestion” at The PIT downstairs lounge: Biscuit Out

7:30 pm ($5): Stand-ups tell stories which are then turned into TV movies at The PIT Loft (154 West 29th Street) hosted by Catherine Cypher, Emily Duke, and Christina Sirabian: Live or Die

[TOP PICK] 8:00 pm ($5): Top improvisors Connor Ratliff, Shannon O’Neill, Brandon Scott Jones, and/or Molly Thomas “talk to one person for less than 10 minutes and let them know how they die 45 minutes later” at the UCB Chelsea theatre: We Know How You Die

[$] 8:00 pm ($20): This Harry Potter parody is crippled by a mediocre script, but is spared from being an utter waste of time by inventive direction from the highly talented Kristin McCarthy Parker (Hold On To Your Butts), and a large and mostly likeable cast (including the wonderful Langston Belton…who doesn’t get to do nearly enough) at The PIT upstairs theatre: Puffs, or Seven Increasingly Eventful Years at a Certain School of Magic & Magic

[TOP PICK] 8:40ish pm (no cover, 1 drink min.): There’s no telling who’ll show up for this final show of this three-year-old stand-up series at Brooklyn’s Franklin Bar and Lounge (739 Franklin Street)—ending because the bar is closing—hosted by Khalid A. Rahmaan & Mike Eltringham: It’s Sooo Up and Coming

9:00 pm ($5): Each invited improv group is played a random sample from a music video and then must make up and perform a “making of” documentary for asked to “The audience decides who will start a food fight when improvisers sit down to a potluck dinner” at The PIT downstairs lounge: Making the Video

[TOP PICK] 9:30 pm ($5): The greatest science fiction anthology radio show of all time was X Minus One. Improvisors who know their genre history created this show in which they make up scenes of awe, mystery, and wonder at The PIT upstairs theatre—with an opening act from improv singer Katie Hammond & improv piano player Dan Reitz making up 1940’s-style tunes based on your suggestions: X Plus One

[TOP PICK] 10:00 pm ($5): Comics tackle this challenge: “Think of the one thing you’ve been afraid to do onstage, and then do it at this show,” with tonight’s brave participants Cocoon Central Dance Team (delightful trio of immensely talented comedic dancers/actresses and rising stars Eleanore Pienta, Tallie Medel, and Sunita Mani), Ana Fabrega, Lorelei Ramirez, Ikechukwu Ufomadu, Cole Escola, Mo Fry Pasic, and Tim Platt risking themselves at Brooklyn’s Union Hall hosted by Brett Davis: My Body Is A Vessel

[TOP PICK] 11:00 pm ($5): It’s a clash of titans as UCB weekend improv groups The Curfew and Grandma’s Ashes compete for your laughs and votes at UCB Chelsea’s raucous Cage Match

[FREE] 10:00 pm: Walk-in open mic (with names selected from a bucket) to do anything you want for 5 minutes—”chat, rant, plug, tell a story, be a character, play a game, review a new religion”—for a podcast recorded at The Creek downstairs lounge in Queens’ LIC (10-93 Jackson Avenue) hosted by Mike Guild & Mike Mercadal: The Open Mic Podcast