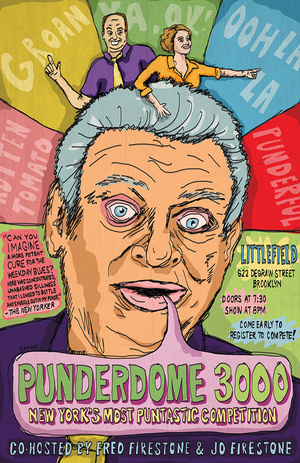 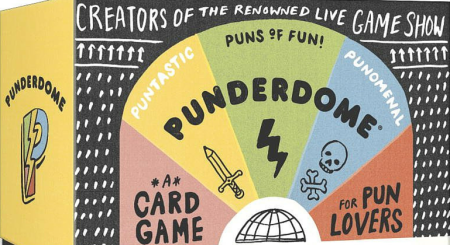 …with 18 audience members competing in Punderdome 3000 (8:00 pm, $10—sold out of advance seats, but there’ll be tickets at the door, Brooklyn’s Littlefield at 622 Degraw Street; take R subway to Union Street)

More recommendations for the best in NYC  comedy tonight (in chronological order, with top picks noted and shows over $10 marked with $) include:

[TOP PICK] 7:00 pm-11:00 pm ($7 for the whole evening): In this 4-hour extravaganza, six singing & dancing improv groups at The Magnet make up musicals based on audience suggestions, followed at 10:15 pm by an improv jam open to the audience hosted by group Warm Blooded: Magnet Musical Megawatt

[TOP PICK] [$] 8:00 pm ($20): From the team that created the amazing Hold On To Your Butts: Kyle Schaefer, Nick Abeel, Matt Zambrano, and foley artist Blair Busbee create live on stage a “shot for shot” parody of the first Lord of the Rings movie directed by the highly talented Kristin McCarthy Parker at The PIT upstairs theatre (123 East 24th Street): Fly, You Fools!

9:00 pm ($5): Three-gal long-form improv by Claire Yale, Julie Rosing, and Jenny Bareilles “who will drag you from scene to scene with borderline offensiveness” at The PIT Loft (154 West 29th Street): Come Get Wrecked

[FREE] 10:15 pm: In this free Magnet show, audience members can join in with musical improv group StartUp to make up stories in song on the spot: Musical Magnet Mixer