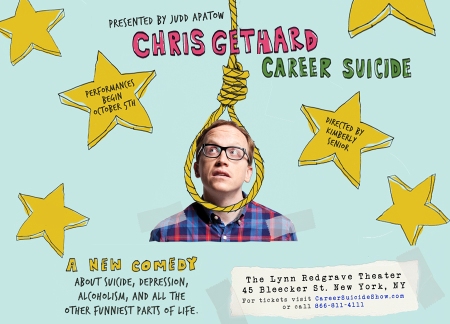 Comedy genius Chris Gethard tonight kicks off a commercial run of his superb one-man show about anger, depression, perseverance, and the healing power of laughter, seamlessly blending stand-up and storytelling in a way that creates a deep, poignant, and hilarious experience: Chris Gethard: Career Suicide (7:30 pm through November 27th, $38-$48, The Lynn Redgrave Theater (45 Bleecker Street, right next to the #6 subway’s Bleecker Street stop)

[TOP PICK] 7:30 pm ($8): Storyteller Lyssa Mandel invites comics to “expose their bleeding-heart adolescent artifacts (journal entries, poetry, original songs, and art), then laugh at and with their own flaws,” with tonight’s guests Abbi Crutchfield (Broad City, truTV’s You Can Do Better), Jen Rudolph (owner of The Actors Green Room), and Chris Griggs (TV Land), plus music from Caitlin Allen (Cait & The Critters), all at Astoria Queens’ QED: A Place to Show & Tell (27-16 23rd Avenue): The Bitch Seat

…and in the second half of this double-bill, a musical sketch comedy show: Pop Roulette’s Amazing Earth

8:30 pm ($10): “The siblings run, The siblings shout, The siblings throw things all about, They do not want to go to bed, Too many voices in their heads, They run and hide when MomDad seeks, Crawl under here, shh do not speak” written by & starring Kelly Cooper, Caitlin Dullea, and Thomas Fricilone, and directed by Michael Bertrando, at Brooklyn’s The Annoyance Theatre (367 Bedford Avenue; take J/M/Z to Marcy Avenue or L to Lorimer Street): The Siblings

[$] 8:30 pm ($15): “Dressed only from the waist up and ankles down, Adrienne Truscott undoes and does in the rules and rhetoric about rape, comedy, and the awkward laughs in between. With ‘appearances’ from George Carlin, Louis CK, Robert De Niro, ducks, whistles, and enough gin and tonics to get a girl in trouble, she lets her pussy do the talking. Set to pop music. Can you make jokes about rape? She plans to, all night long. Even if you tell her to stop” at The PIT downstairs lounge (for a London review, please click here): Adrienne Truscott’s Asking For It

9:30 pm ($5): Willy Appelman co-wrote & performs in this show about diverse oddballs who come together to celebrate a wedding at Brooklyn’s The Annoyance Theatre (367 Bedford Avenue; take J/M/Z to Marcy Avenue or L to Lorimer Street): Characters From a Wedding

9:30 ($5): Over a dozen talented female improvisors—typically including Lauren Adams, Natasha Vaynblat, and Caitlin Bitzegaio—parody all-gal opinion shows such as The View, making up most of the show on the spot based on a loose outline at at the UCB Chelsea theatre. The result is often proof that “less is more,” but if you’re very patient there are worthwhile moments to be had from The Female Gaze

10:00 pm ($5): An improv pianist plays for four improv acts—two of which are musical improv—at The PIT downstairs lounge: The Piano Show

This entry was posted on Wednesday, October 5th, 2016 at 9:08 am and is filed under Best New York Live Comedy Shows. You can follow any responses to this entry through the RSS 2.0 feed. You can leave a response, or trackback from your own site.