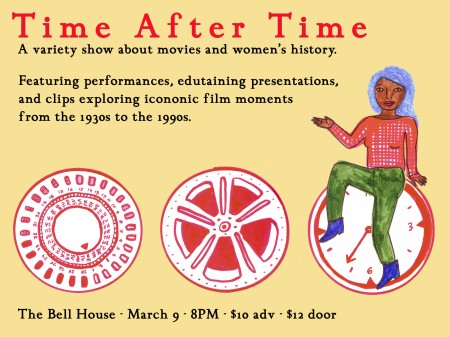 7:30 pm ($7): After each stand-up performs, you and the rest of the audience get to ask them questions about their jokes, with tonight’s comics Frank Nelson, Sarah Kennedy, Sam Evans, Lucas Connolly, and Pat Hastie at Astoria Queens’ QED: A Place to Show & Tell (27-16 23rd Avenue) hosted by Kevin Froleiks & Sam Bourne: Press Conference

7:30 pm ($5): Beth Slack & Brian Hansbury create musical improv about relationships, along with some invited friends, at The PIT Underground: Hansbury & Slack and Friends

[TOP PICK] 8:00 pm ($7): The greatest science fiction anthology radio show of all time was X Minus One. Improvisors who know their genre history created this show in which they make up scenes of awe, mystery, and wonder at The PIT Mainstage co-starring the spectacular Rachel Scherer, with sound design & foley effects from Frank Todaro, and an opening musical improv set from Austin Sanders (Title of Team) and improv pianist Eric March: X Plus One

[TOP PICK] 8:00 pm-Midnight ($10 for the entire evening): Four veteran house improv groups, themed improv show Silence, Please (exploring the nuances of wordless conversation and connection, with music suggested by the audience playing in the background), and improv competition Inspirado, all for just $10 at The Magnet theatre: The Magnet’s Thursday Night Out

9:00 pm ($8): Stand-up & storytelling springboarding off topics tackled by The Ricki Lake Show—fat friends, two-timing traitorous tramps, and so on. Tonight’s theme is “I Want to Strip For a Day…Maybe Longer If I Like It!” with Oscar Aydin, Carolyn Bergier, Kim Manfre, Chewy May, and Billy Procida performing at Astoria Queens’ QED: A Place to Show & Tell (27-16 23rd Avenue) hosted by Matt Smith McCormick: Go Ricki!

[TOP PICK] [$] 9:30 pm ($7): At the UCB Chelsea theatre, a one-man play by Geoff Garlock about memories of a classic music festival: Rock and Roll Will Never Die…

…and in the second other of this double bill, “Becky Abrams is determined to go on a date with every boy she can, and you’re damn right that she’s going to enjoy it while she does:” A Date with Every Boy

[TOP PICK] 9:30 pm ($10): Eight performers from the Ten Bones Theatre Company attempt to recreate a classic fairy tale, Beauty and the Beast, with each using only what he or she can remember from seeing the movie and/or the musical, or reading the story, just once. To add to the fun are a few rules: “Performers must incorporate lines written by the audience; performers must incorporate any sound effect played by the tech booth; one lucky audience member will be given a bell that they can ring three times—once rung, the actors must create a scene that has no business being in Titanic but makes perfect sense given where they are in the story” at The PIT Mainstage: Beauty and the Beast…Entirely From Memory

[TOP PICK] 9:30 pm ($7): In this themed sketch show, “We’re bringing you the hottest looks that were denied access to New York Fashion Week for being ‘too ugly,’ ‘idiotic,’ and/or ‘not a real design.’ Skip the line and spend the evening with us as we dazzle you with looks that will have you asking ‘Is that fashion or just someone’s trash?’ This is the place to see and be seen if you weren’t able to get in anywhere else” at UCB Chelsea hosted by the talented Natasha Vaynblat: NY Fashion Week Flagship Show (Rejects)

[TOP PICK] 10:00 pm ($7): A classic improv group whose members include Anna Drezen (writer for Saturday Night Live; superb stand-up who blends jokes with characters, movement, and sketch; author of How May We Hate You) comes back together for one night only to make up scenes at The PIT Underground: Dangerbox! The Reunion Nobody Asked For

[MEGA-TOP PICK] 11:00 pm ($7): A battle of titans, as musical improv group Rumpleteaser goes up against improv dynamo Fuck That Shit—which beat Rumpleteaser to win this year’s Cage Match Championship title in January by 131 votes to 87. Will history repeat itself, or this time will music score an upset? Come see as these two comedy giants compete for your laughs and votes at UCB Chelsea’s raucous Cage Match

[TOP PICK] 11:00 pm ($7): A one-man show by Omar Argentino that blends scripted material with improv, and that’s toured the world, plays for one night only at The PIT Mainstage: Jumping Muros: A One-Man Theatrical Improv Show

6:00 pm ($3): A weekly improv jam for which the number of participants on stage is determined by a roll of the dice at The PIT Loft (154 West 29th Street) hosted by Jon Monje, Glorillis Tavarez, Trumane Alston, and Julien Darmon: Chance Encounters Jam

This entry was posted on Thursday, March 9th, 2017 at 3:43 pm and is filed under Best New York Live Comedy Shows. You can follow any responses to this entry through the RSS 2.0 feed. You can leave a response, or trackback from your own site.