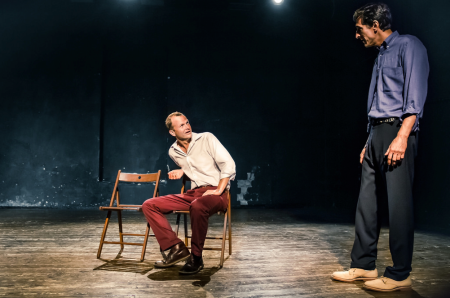 Acclaimed Chicago-based theatrical improv duo TJ Jagodowski and Dave Pasquesi are described by The New York Times’ Elise Czajkowski as “masters at slowly building characters and establishing complete, multilayered universes in 50-minute sets…at their finest, the two men examine the minutiae of everyday life with the precision of a keenly observational stand-up set; that they are doing so on the fly makes it all the more exhilarating to watch.” Performing in NYC for one night only are TJ & Dave at Town Hall (8:00 pm, $24-$31.50 depending on seating, Town Hall at 123 West 43rd Street, between 6th Avenue & Broadway)

7:00 pm ($7): A solo show by Jamie Aderski about her experiences in becoming a mom at The PIT Mainstage: Cry Baby: My (Reluctant) Journey Into Motherhood

[TOP PICK] [$] 7:30 pm ($12): Top improvisors Connor Ratliff, Shannon O’Neill, Brandon Scott Jones, and Shaun Diston “talk to one person for less than 10 minutes and let them know how they die 45 minutes later” at the UCB Chelsea theatre: We Know How You Die

7:30 pm ($10): A house sketch group that includes the wonderful Sarah Nowak and is directed by Holden McNeely (Murderfist) performs at The PIT Underground: National Scandal

[TOP PICK] [$] 9:00 pm ($12): Some of the finest improv in the country from brilliant comics Connor Ratliff, Shannon O’Neill, Silvija Ozols, Alexandra Dickson, and/or Michael Delaney forming a seamless and hilarious group mind at UCB Chelsea—the all-star members of The Stepfathers

9:00 pm ($10): Improv groups who are independent (not affiliated with a particular theatre or school) Fresh Cakes, Just Gravy, The Doug Funny Pages, and Doorman make up scenes at The PIT Underground: Super Indie Takeover

9:30 pm ($7): A themed comedy show featuring improv and more at The PIT Mainstage hosted by Florence Friebe: The Thank You Show

10:00 pm ($5): Petey DeAbreu invites several of his comedy friends—who tonight are Adrienne Iapalucci, Shalewa Sharpe, and Daniel Simonsen—to joke around with him, plus music from Pretty Sad White Girls, all at The Creek upstairs theatre in Queens’ LIC (10-93 Jackson Avenue): Petey’s World

10:30 pm ($5): Comics “perform kooky bits based off online videos. The goal of the show is primarily to be louder than the jazz music coming from upstairs” at Brooklyn’s The Annoyance Theatre (367 Bedford Avenue; take J/M/Z to Marcy Avenue or L to Lorimer Street) hosted by Matt Barats: Louder Than Jazz

[TOP PICK] 11:30 pm ($7): This monthly storytelling, stand-up, and carny show brings the blog And I Am Not Lying to life on stage, with storytelling from host Jeff Simmermon, stand-up from Emma Willmann (Stephen Colbert, Bravo, Oxygen, Sirius XM), Lukas Kaiser (Chappelle’s Show, VH1; senior writer/producer for Spike TV; co-host of Amazingtown), and Tanel Joachim, and burlesque from Nina Marina and Brief Sweat, all performing at the UCB East theatre: And I Am Not Lying

[FREE] 11:30 pm: A free jam open to the audience in which improvised scenes turn into freestyle rap at Brooklyn’s The Annoyance Theatre (367 Bedford Avenue; take J/M/Z to Marcy Avenue or L to Lorimer Street) hosted by Ray Morency, Richie Alfson, and Fat Doctor: Off Top

This entry was posted on Friday, March 10th, 2017 at 9:06 am and is filed under Best New York Live Comedy Shows. You can follow any responses to this entry through the RSS 2.0 feed. You can leave a response, or trackback from your own site.